The Birth of Crusoe Conrad: NOT a Short Story

22 Sep The Birth of Crusoe Conrad: NOT a Short Story

Posted at 11:53h in Crusoe, James, Pregnancy, Sarah by The Redheads 4 Comments
0 Likes

The last post ended with Saturday evening, September 10th, wondering if tonight was the night. (It wasn’t, but it was close.) The hard contractions fizzled out by evening, so we went to bed and hoped he would come soon. Sunday morning I had one hard contraction that convinced me to stay home from church. And then. No other ones. Midwife Shannon came to check me, just to give me some peace of mind that either things were progressing…or that it would still be a while. (These things never guarantee anything, but I was ready to at least think I knew something!) Well, I was already at 5cm. Woo! But not in active labor. Boo. So James and Auntie Anna took the kids to church, and I went for a long walk. And had zero contractions. ZERO. Sigh. The church picnic was right after church, so I decided delicious free food was a fair alternative to having a baby. Had a couple good Cs there, but nothing to write home about. We came home, and I went for another 1-mile walk. With a couple good Cs. But just a couple.

And then I faltered. How serious was I about letting him come when he was ready? I felt like I was willing to be patient if we were going to be patient, but I was also willing to work to help things along if things were ready to be moved along. But which were we doing?! I called Shannon for a consultation. After hearing some natural ways that she could help get things going, I decided I just couldn’t do it. Labor is often harder when you force it, and I just knew I’d regret interfering with my body. (Especially because the reasoning was not a medical emergency but rather an antsy mom.)

So we came back to peace with waiting. And that’s when things got interesting. (Ina May Gaskin says labor is much more mental than we give it credit for!)

James went out back to grill our dinner (steak for me, hot dogs for the kids…a win-win for both ha!). When he came back inside, I was bent over the door frame, moaning through my most serious C yet. He looked at me with big eyes and confessed, “You’ll never believe what I just prayed–that God would ‘light the fire of labor!'” Then he added, “I have no idea where I got that phrase.” (He’s not normally quite so eloquent.;)) “So YOU did this to me?!” I snapped. Then I softened, realizing that this could mean baby’s coming soon. “Thank you!”

I ate a small supper and headed upstairs to rest in between contractions, while Anna and James hung out with the kids. An hour later, it was bedtime, so we swapped floors, and I came down to the couch, where I labored for the next 4 hours (but man, it went fast!). I’m not entirely sure why, but this labor process was my most peaceful yet. I had no expectations of it going fast or slow, no timeframe in mind. Something I had encouraged myself with leading up to this point was the reminder that while contractions are hard (to be sure!), they only last 60-90 seconds and then you get a break (normally<—this has been my experience all four times). By the time the contraction has peaked, it’s already on its way back down. I worked hard to fully relax, wholly embrace, completely surrender to each contraction. In fact, I welcomed each one, thanked them for their work, for helping me meet my baby boy sooner. In between my Cs with Liddi, I was exhausted (and slightly afraid of the next one that was coming); I still had to focus and rest. In between these Cs, I played Solitaire on my phone, listened to my baby playlist, played a few different Talking Tom games with my sister (hey, we were getting points for the kids, all right?!). Then I’d feel another one start, would get down into position on the couch, and listen to James’ voice as he coached me through. (These varied between 6 and 10 minutes apart…with two a full 25 minutes apart!)

We decided to call Jessica (our photographer and extra set of hands) at 11:00pm, unsure if we’d need her yet or if she’d just sleep on the couch while we waited for things to get more serious. She walked in the door, sat on the couch to chat with Anna, and BOOM, at 11:17pm I had a THREE-MINUTE contraction (kept waiting for it to stop and it.just.wouldn’t!) and felt my water POP.

“I WANT SHANNON, AND I WANT TO GET INTO THE TUB,” I declared. (It was nice to finally know exactly what was happening.)

Anna, Jess, and James JUMPED into action, filling the tub and preparing pots with boiling water. We hadn’t filled up the tub ahead of time (it could cool too much, and cold water is MUCH harder to heat than hot water is to cool; trust us, we know). Plus, if you’re not in full-blown active labor, it could slow things down. And my Cs were still only occasionally 5 minutes apart. (In the hindsight of 4 births, I think we have concluded that that’s just how my body labors, rarely getting closer than 5 minutes apart.) 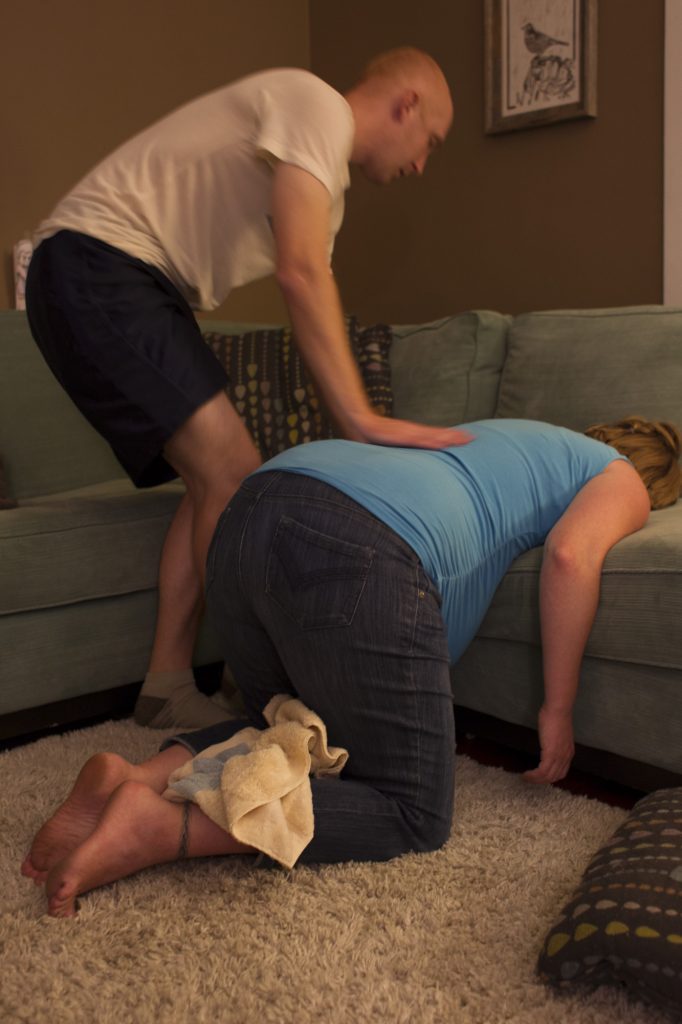 James called Shannon, who came promptly (thank the Lord she only lives two miles away).

The second I got into the tub, I knew he was coming. But while I like to labor mostly alone, I do NOT like to push alone, so I ignored the feeling for the five minutes it took Shannon to arrive. In the meantime, James came back to my side with tears in his eyes and said, “You’ll never believe what I just prayed.” I waited. “I prayed that he would come before midnight!” I was so happy I kissed him. (What we’re all wondering, though, is WHY DIDN’T HE PRAY THESE THINGS LAST WEEK?!)

This guy is my hero. He tells me I did a great job.
But that could not have been true without his steady
voice coaching me through. For this birth, he repeated
Deuteronomy 31:6, which gave me the courage to embrace
my contractions and to know that God was walking with me. 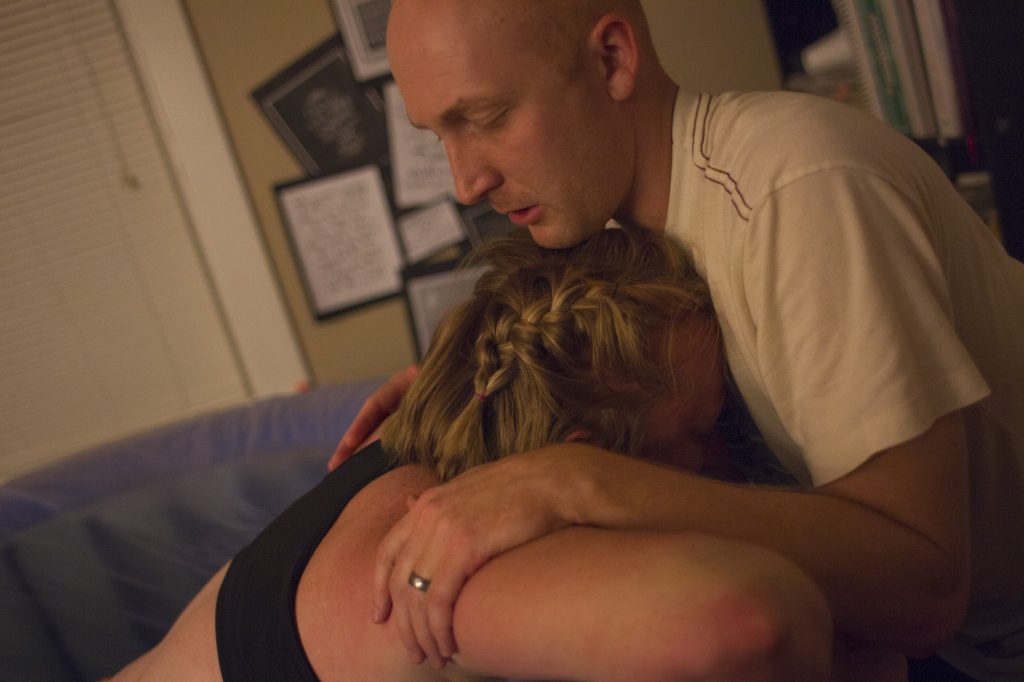 Well, James let me know when Shannon walked in (it’s a little hard to see when your head is buried in your husband’s chest). The water wasn’t quite deep enough (they have to be born either completely in or completely out of water), but come push time, it was acceptable, so long as I stayed low in the water. Thirteen minutes and two pushes later, at 11:48pm, Crusoe Conrad was earthside, quickly pink with just enough of a cry to let us know he was here. I didn’t feel fear (though it was hard work and at times overwhelming). As I’ve thought about this birth, I’ve realized that while this is my 4th birth physically, it’s only my 2nd birth mentally (hospital epidural births were my first two), and I felt so much more confident this time around! Fourth time’s the charm, I guess. 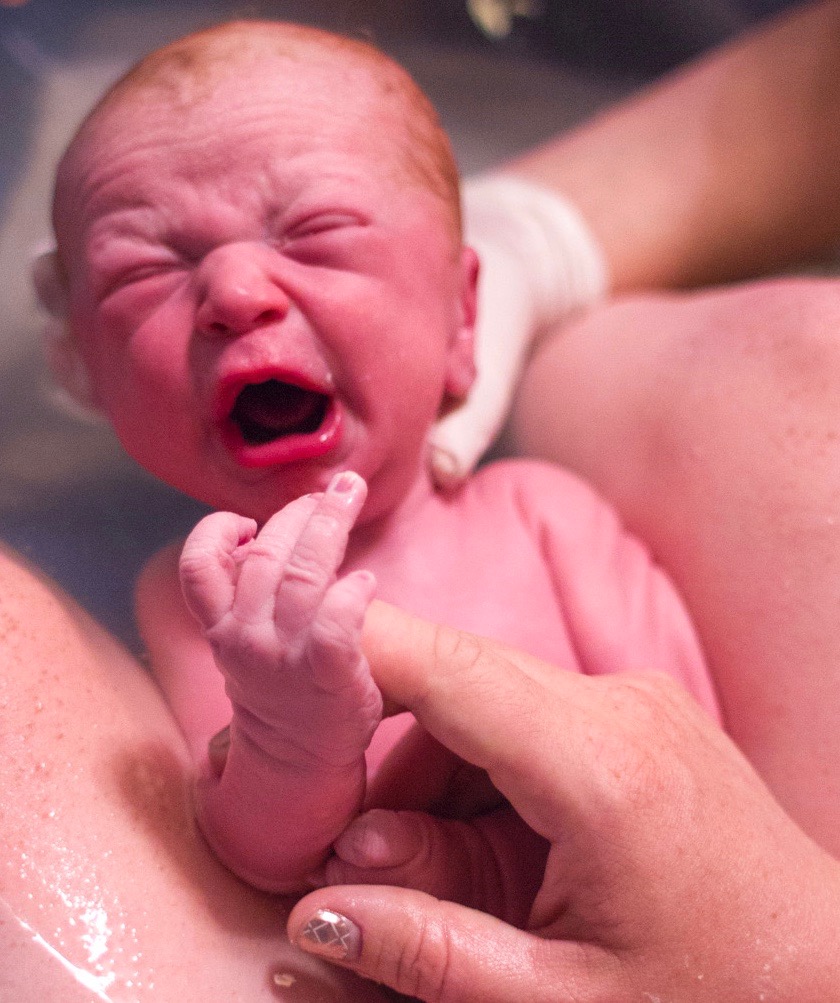 I was so happy to meet him.
I cried and cried. 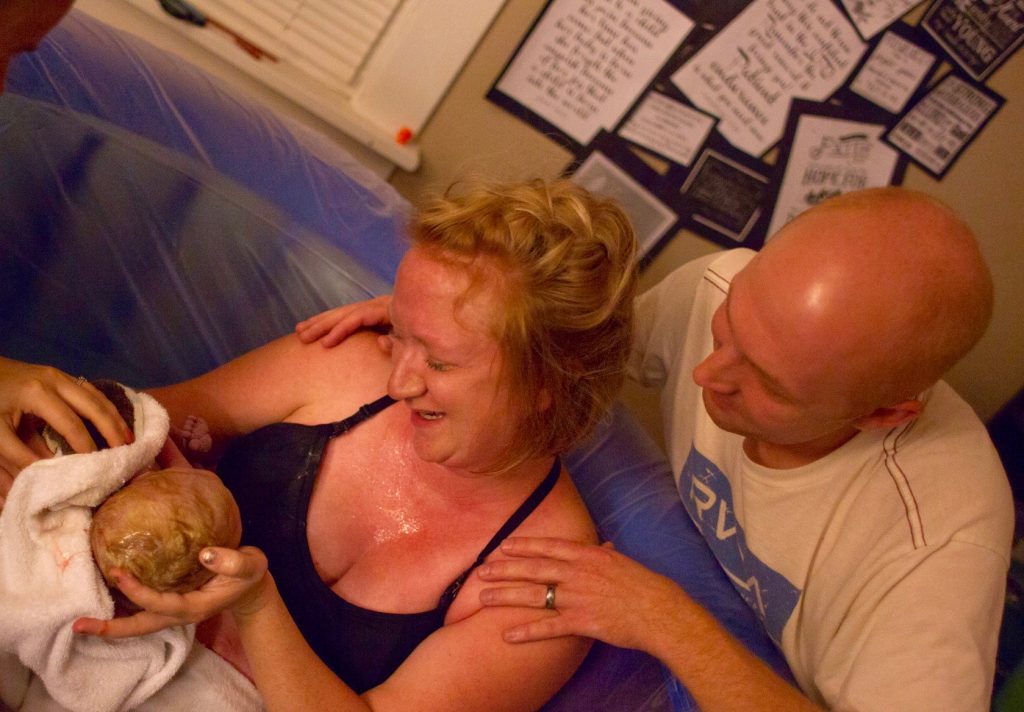 Shannon worked on getting the goop out of his hair.
The one con of being born with a nice headful! 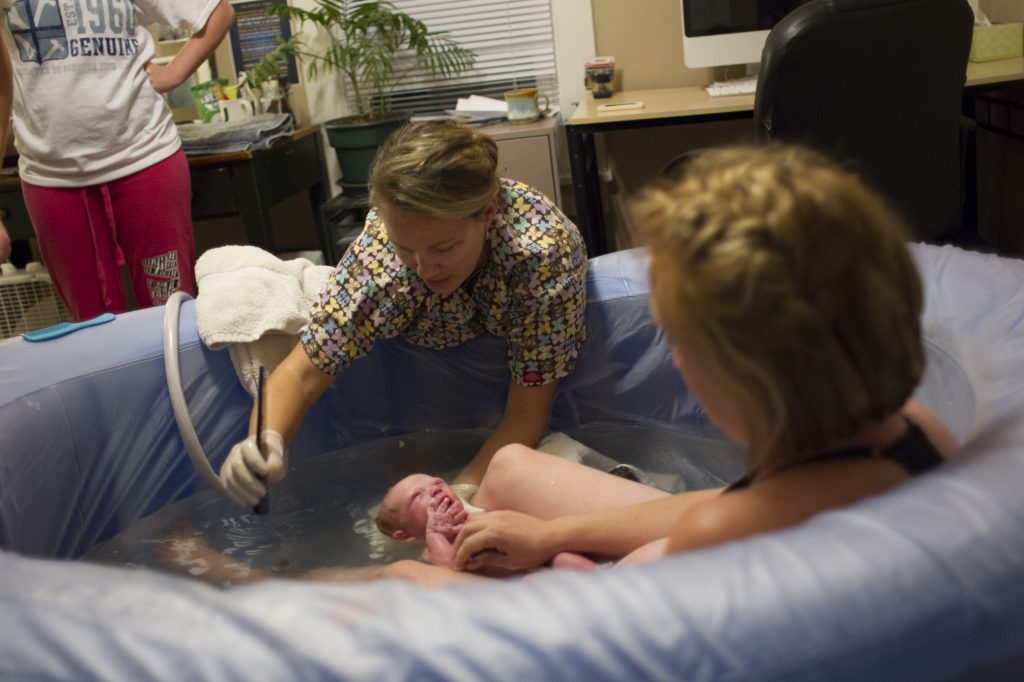 (Check out those gorgeous highlights!
Ashley Potter at Smart Salon, if you need someone.) 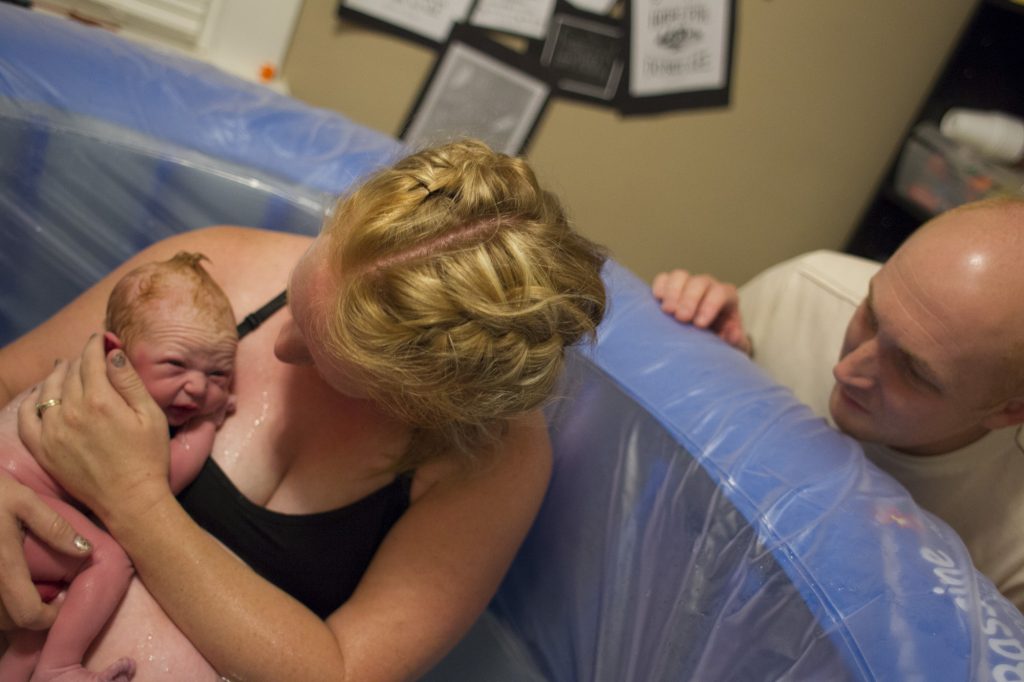 After the placenta was born (that’s just as weird to type as it is to read),
I jumped in the shower for a quick rinse. Of course, by jumped I mean
half-walked, was half-carried. And Daddy and Son had their first moment. 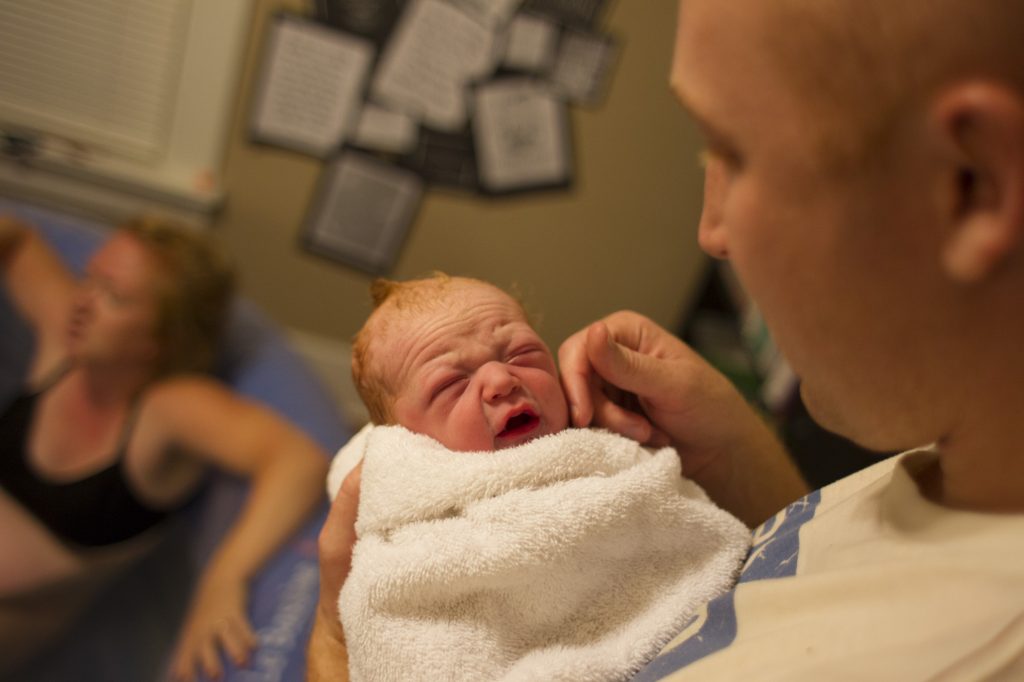 Nursing has been the easiest for me this time around,
so we just worked on helping Cru get the hang of things. 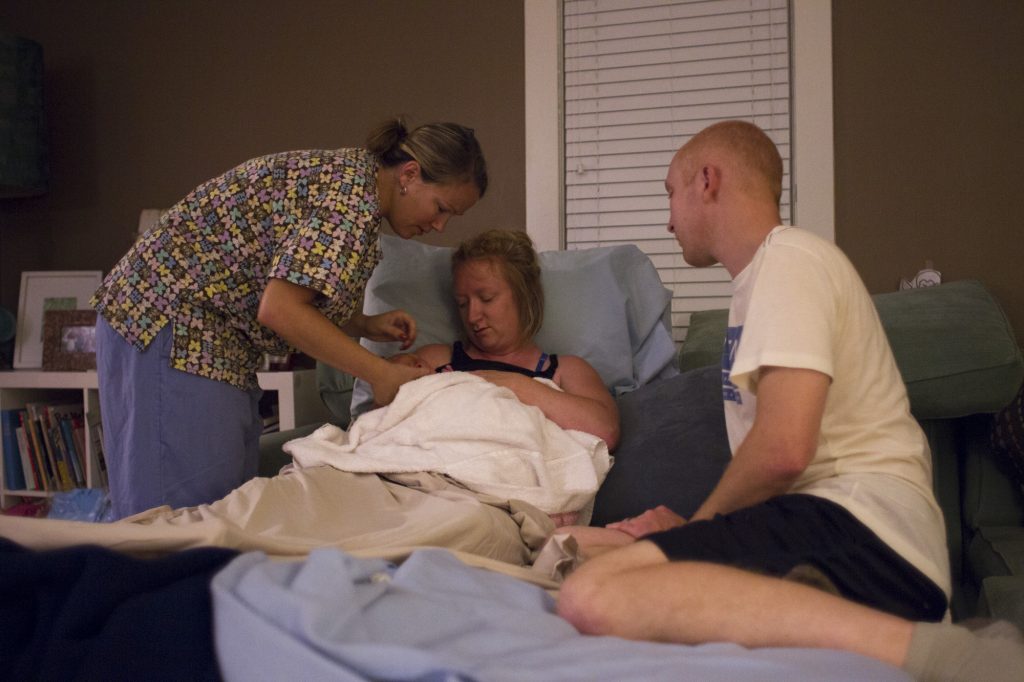 This may be gross for some, but to me, this is a miracle.
This little sac housed him these last nine months.
And nourished him. And comforted him.
Incredible design. 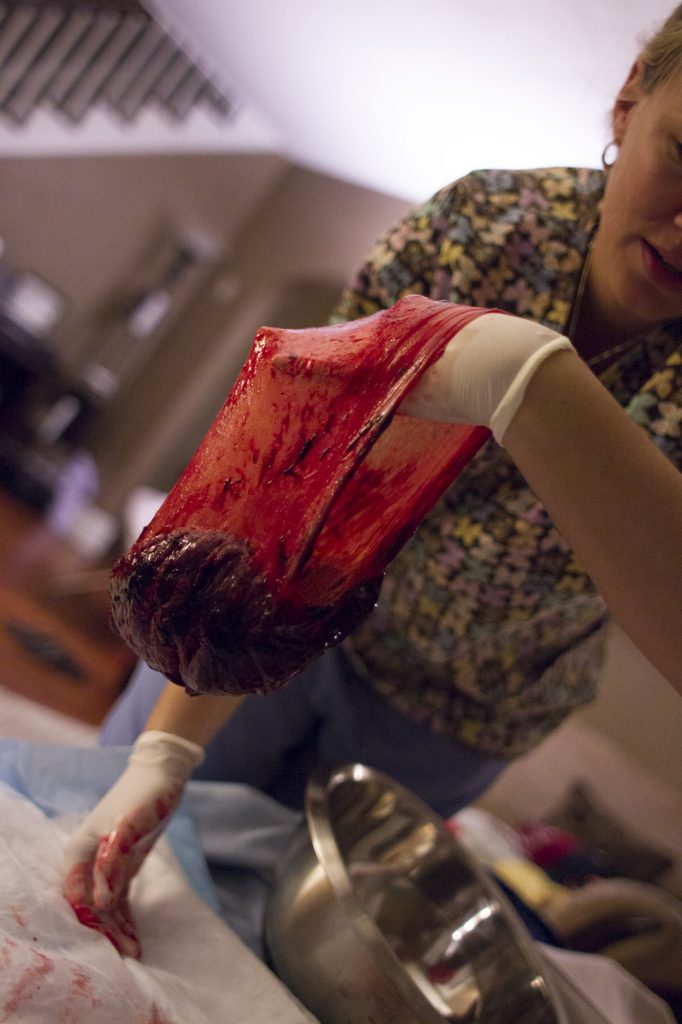 We’d invited my sister Anna to participate in this birth
(oh and maybe watch 3 kids on the side, sooo it
was nice that he was born after they went to bed).

I loved sharing that moment with her.

Women in the US rarely experience birth before they
deliver their own babies, unlike nearly every other culture
on the planet. I didn’t want this to be true for her. 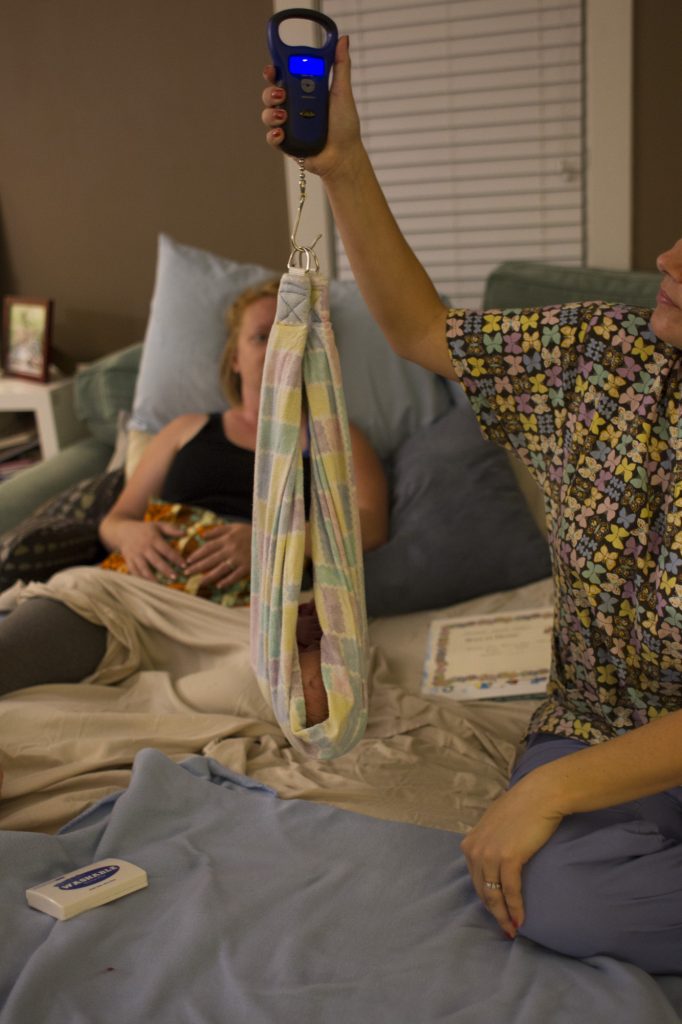 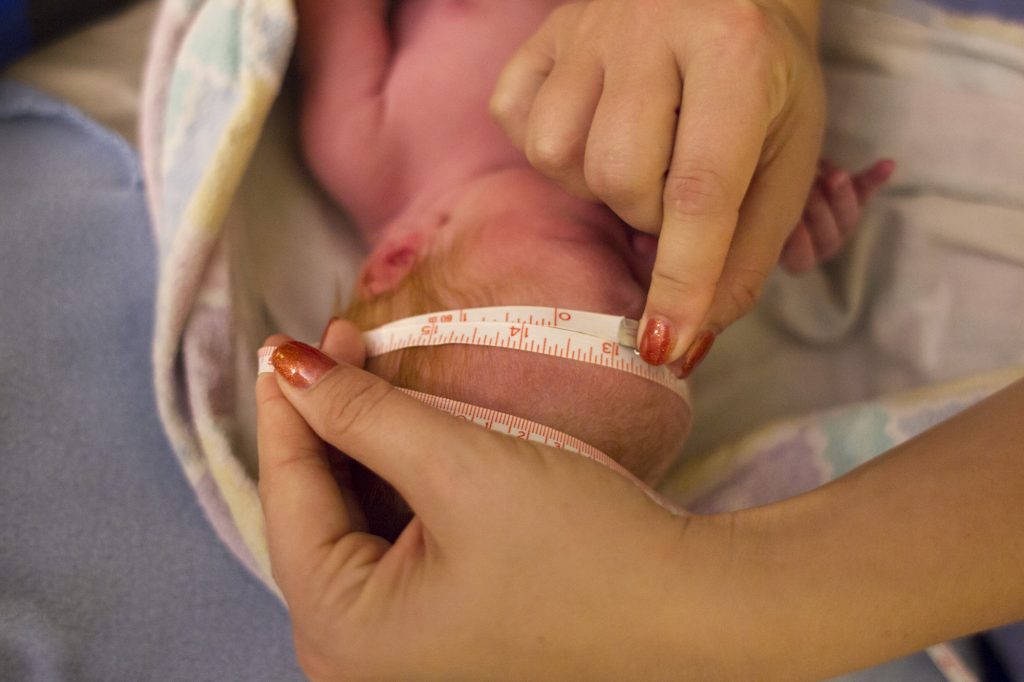 Shannon loves every baby she catches.
And they love her! 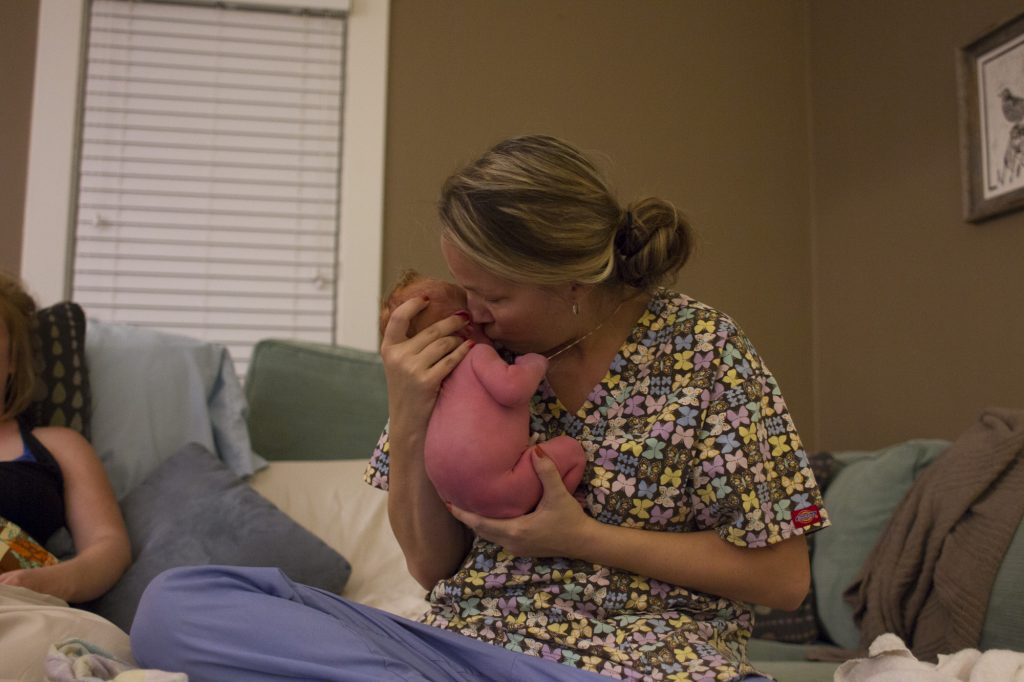 He’s got his boxing hands up. 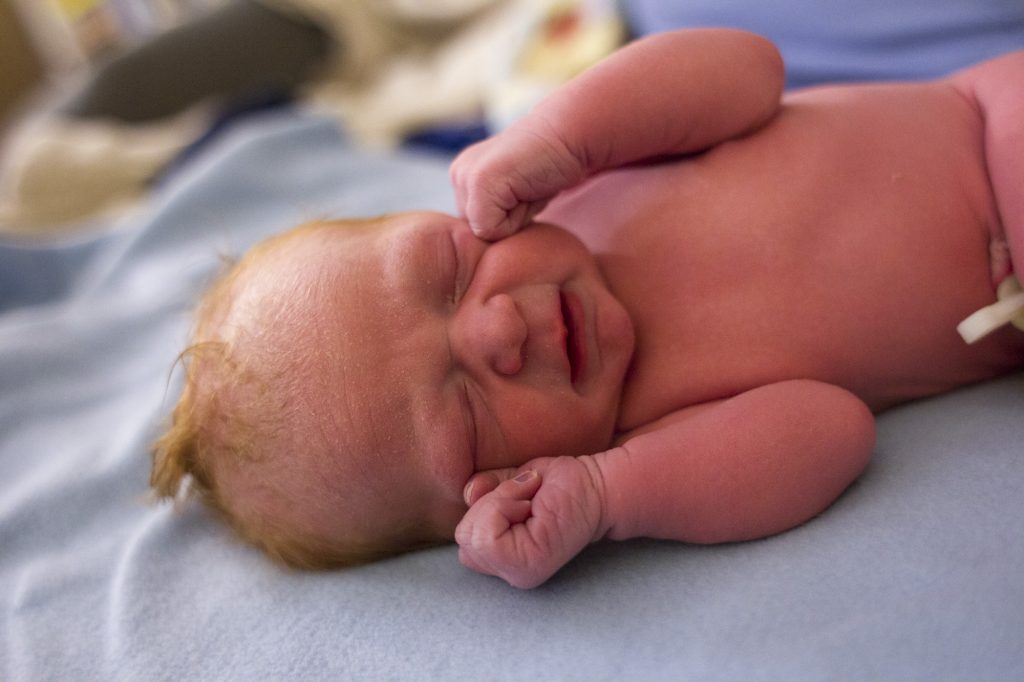 His feet after stamping his prints onto his birth card. 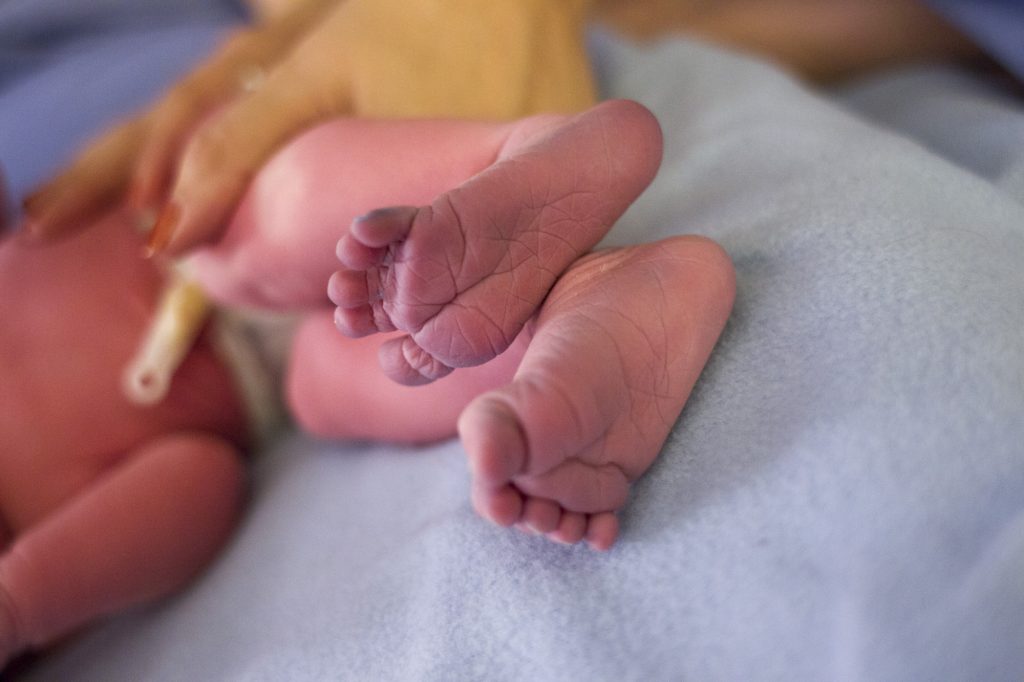 Crusoe’s got the perfect little spike in his hair.

I tried to smile at the camera for this pic, but I just couldn’t stop staring
at my new baby. I only slept an hour that night (which is not advisable),
because I was just so happy. (He and I reversed roles the 2nd night, waaah.) 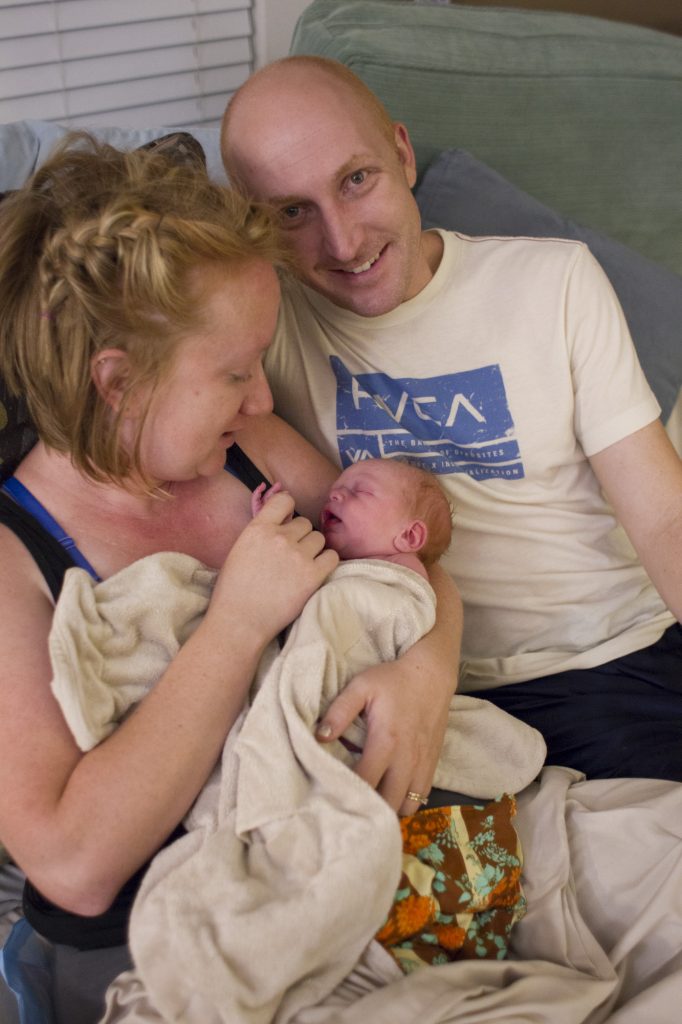 We used the wisdom of our age and chose not to wake the kids to meet him.
(It didn’t work out so well for us last time.)

P.S. No flooded basement this time made for a much more peaceful afterbirth.

P.P.S. And just so you know, if you wanna talk home birth, water birth,
natural birth, or just plain birth/nursing/new baby stuff, there
are lots of people who are willing to share their stories…
and I am one of them! Hit me up sometime, eh?

Deuteronomy 31:6
“Be strong and courageous.
Do not be afraid or terrified because of them,
for the LORD your God goes with you;
He will never leave you nor forsake you.”