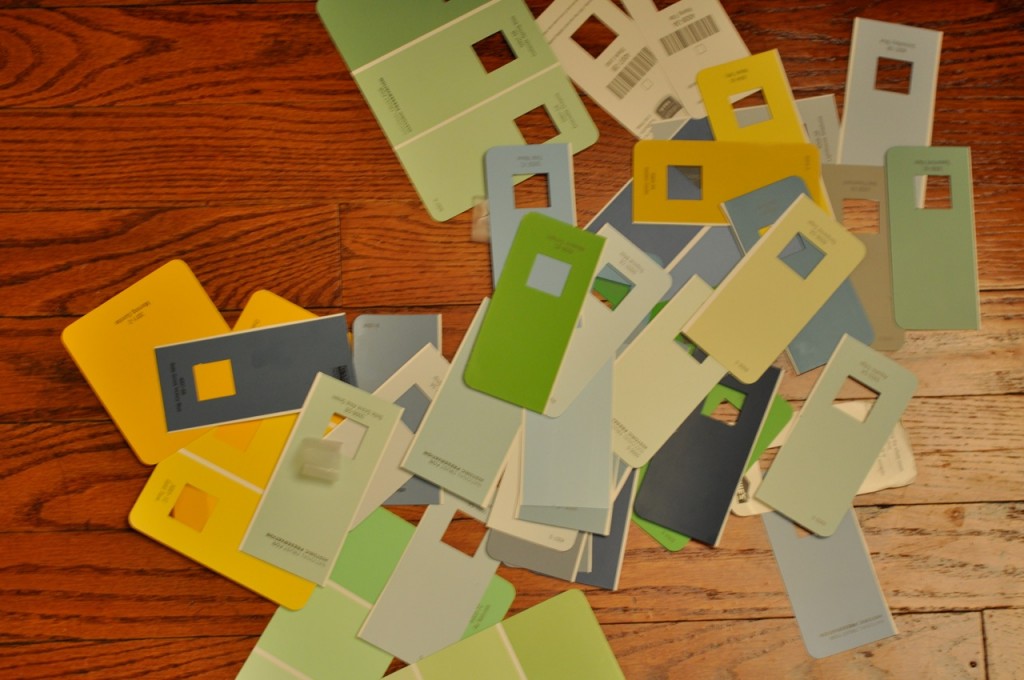 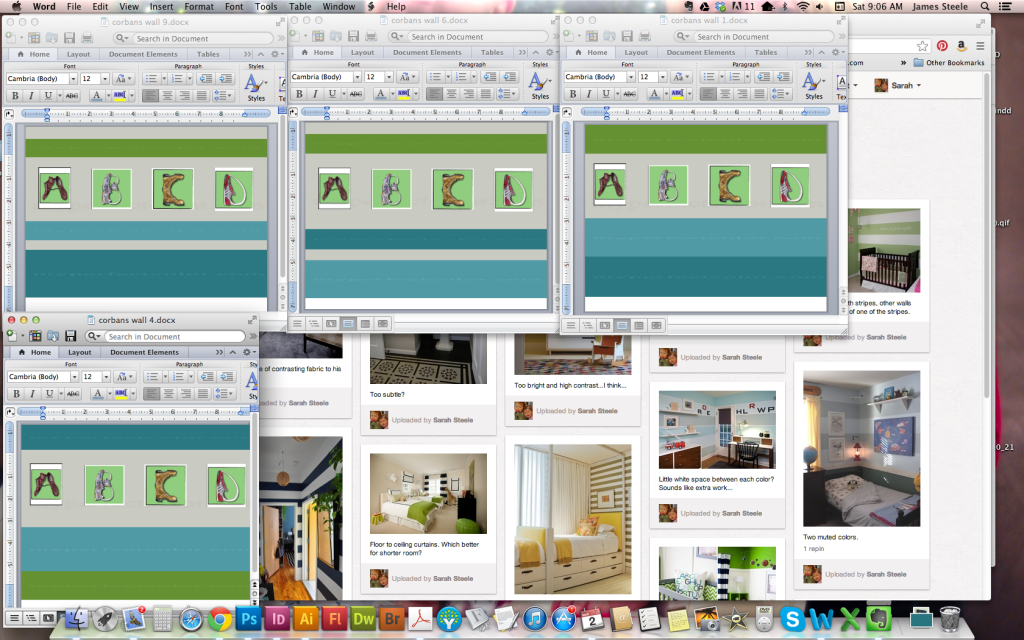 Measuring (what would I have done without you, Imelda??). 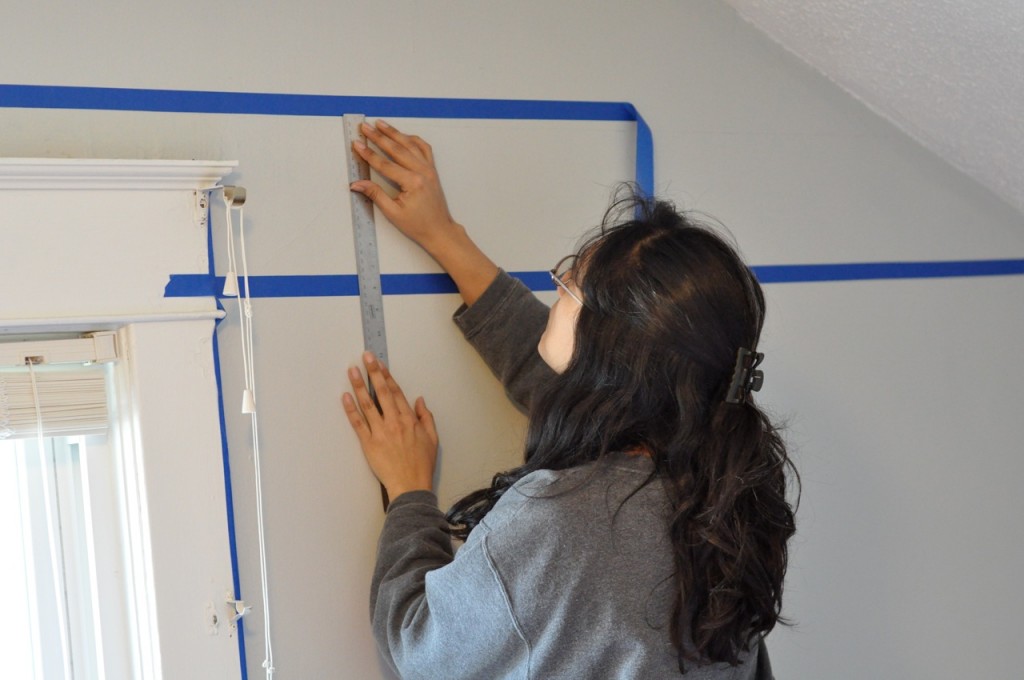 Taping and taping and re-taping. 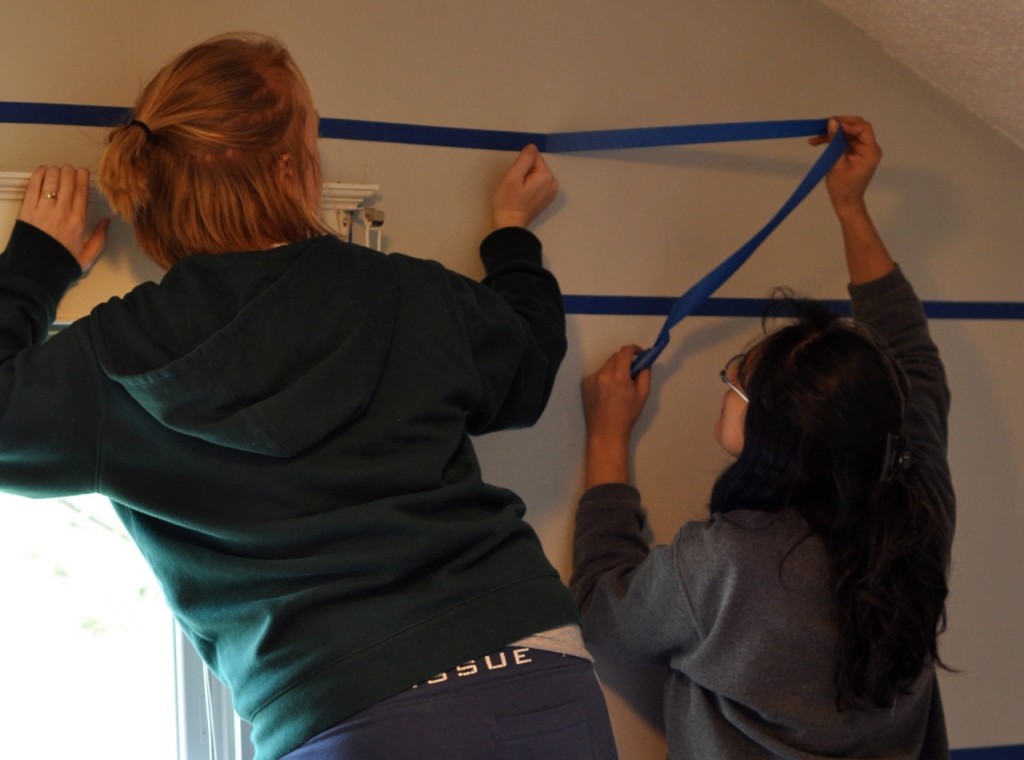 Sealing the tape. (This is the tutorial I followed.
I sealed it with the base color, just fyi, aaaand it worked!) 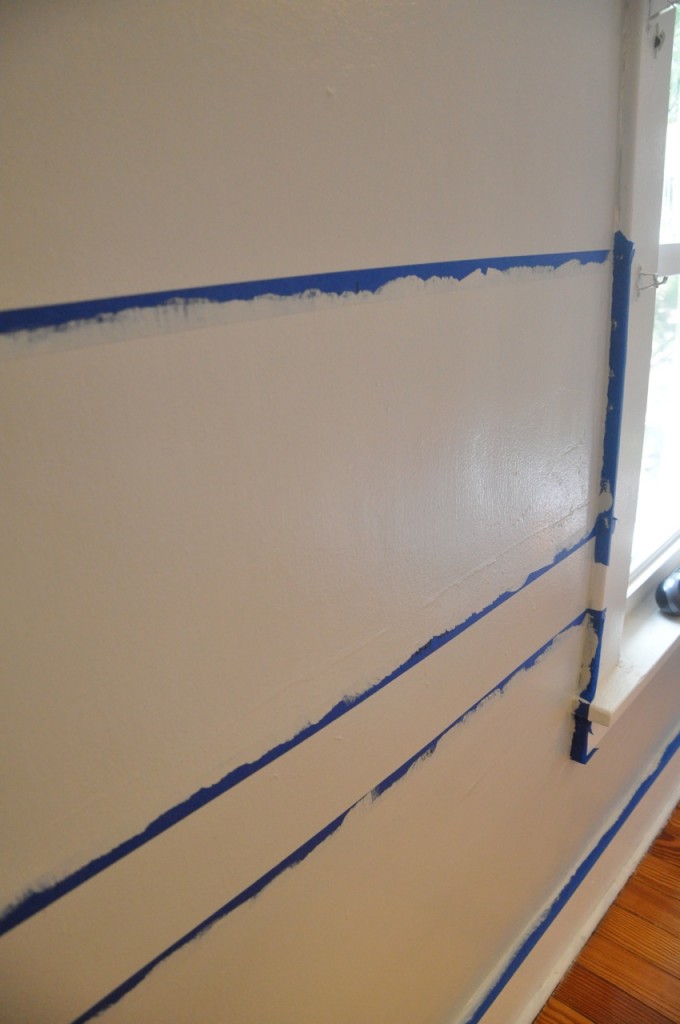 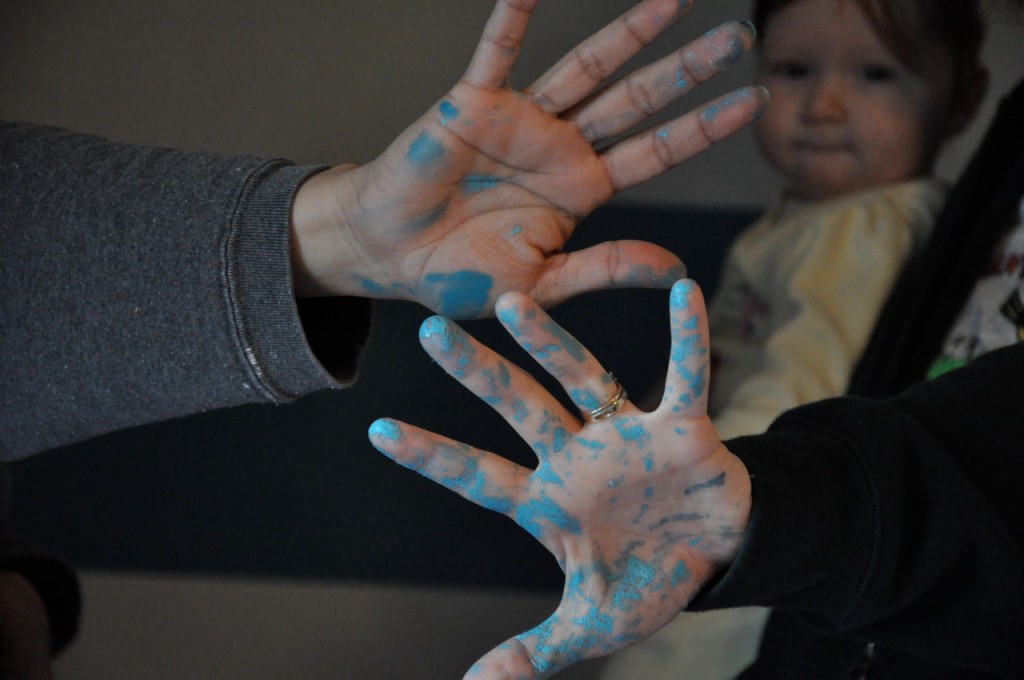 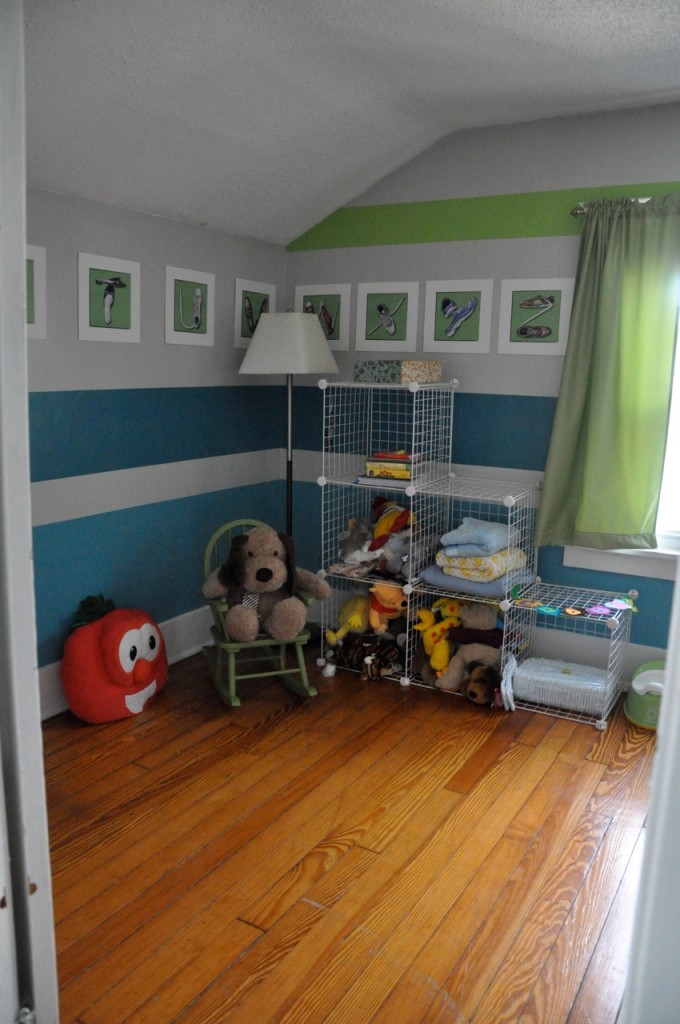 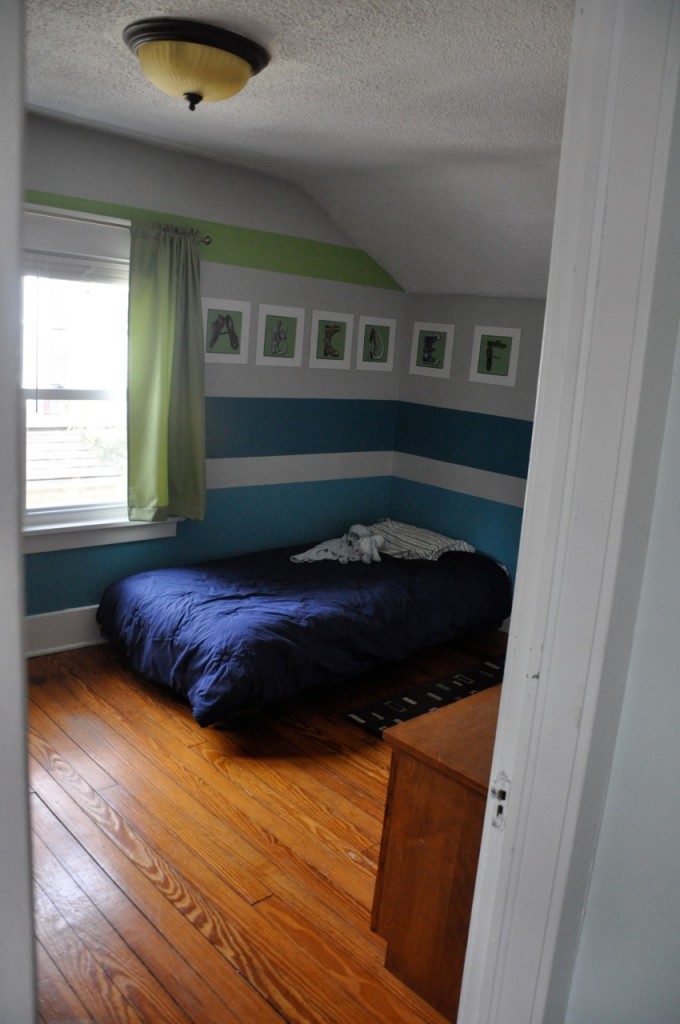 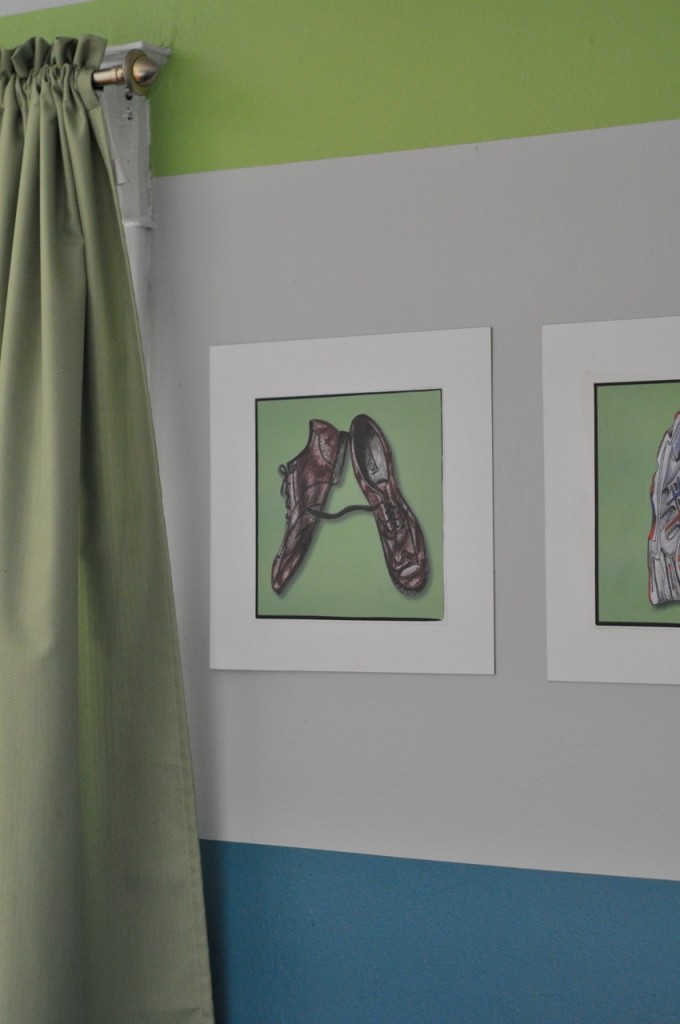 But the Shoephabet gives those stripes purpose. 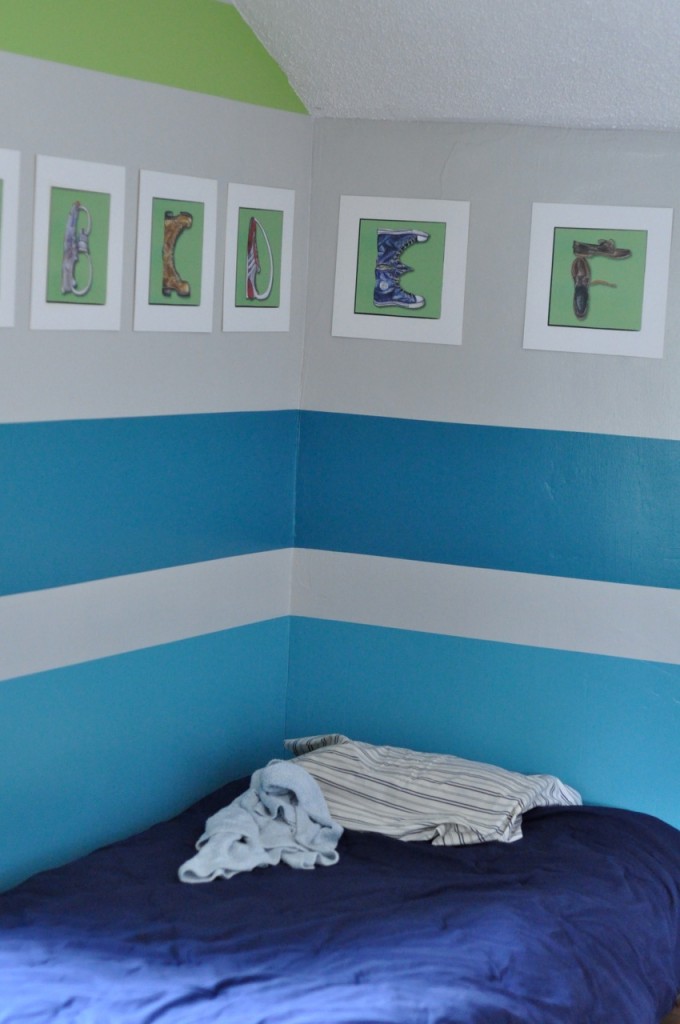 James drew those letters when he was in college and won first place in a juried art exhibit. 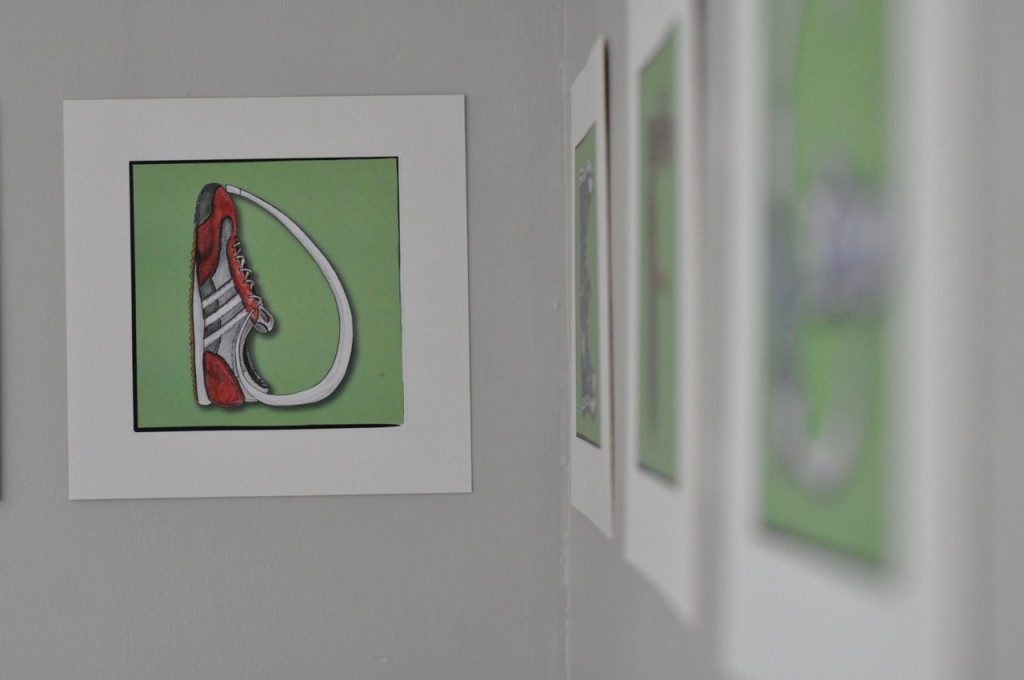 He claims to despise them, “college work,” in his terms. 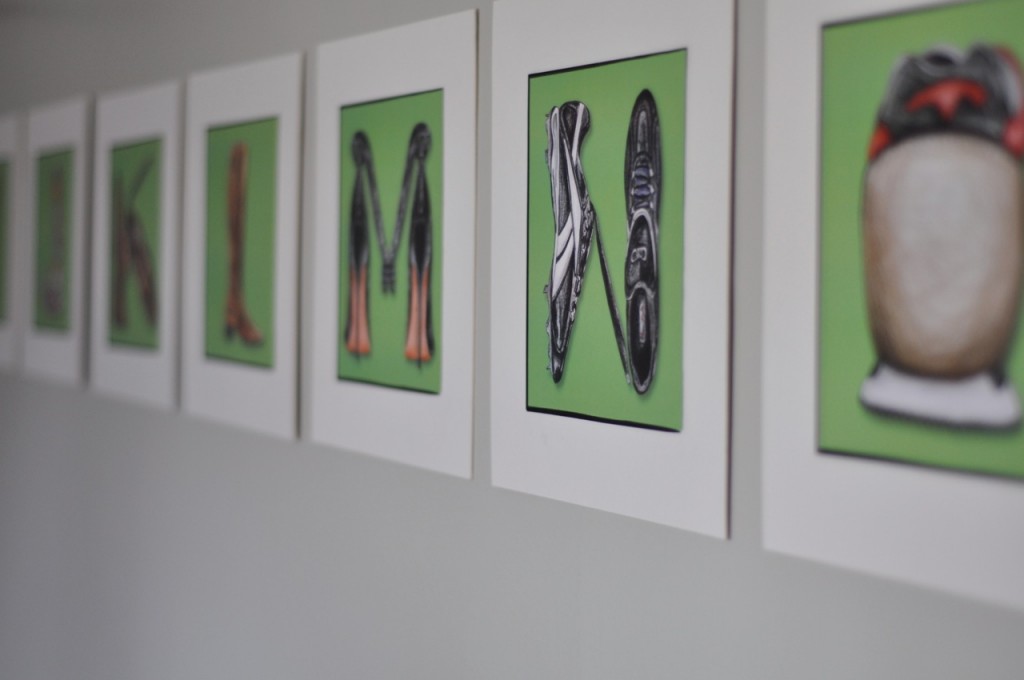 I actually may have married him to have access to this art for a future kids’ room. 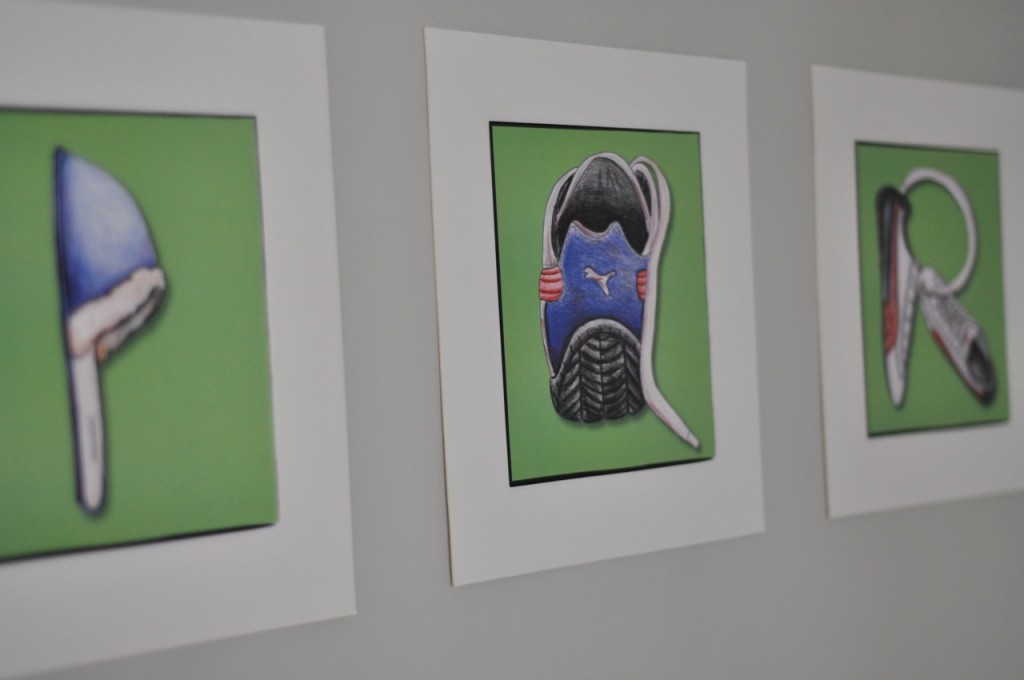 Okay, so there’s lots else I love about him too…
But if you agree that they’re AWESOME, please leave tons of comments.
Normally, I don’t plead for comments, but this time, I’ve got something to prove…
that my husband and his work ROCK! 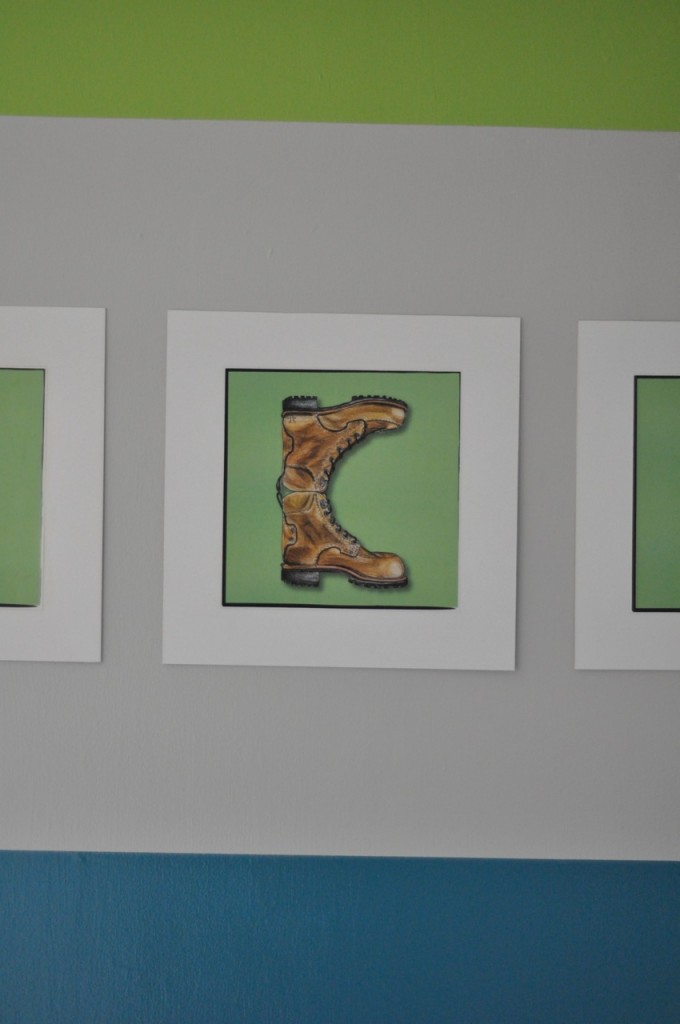 So back to the room. I trimmed up the existing curtains to fit the window.
Love the floor-length idea, but it just kept getting in the way of his bed.
This time they were actually too long (‘member how they were too short
in Jaeda’s room?), so I had to hem them a second time. Someday I’ll get it… 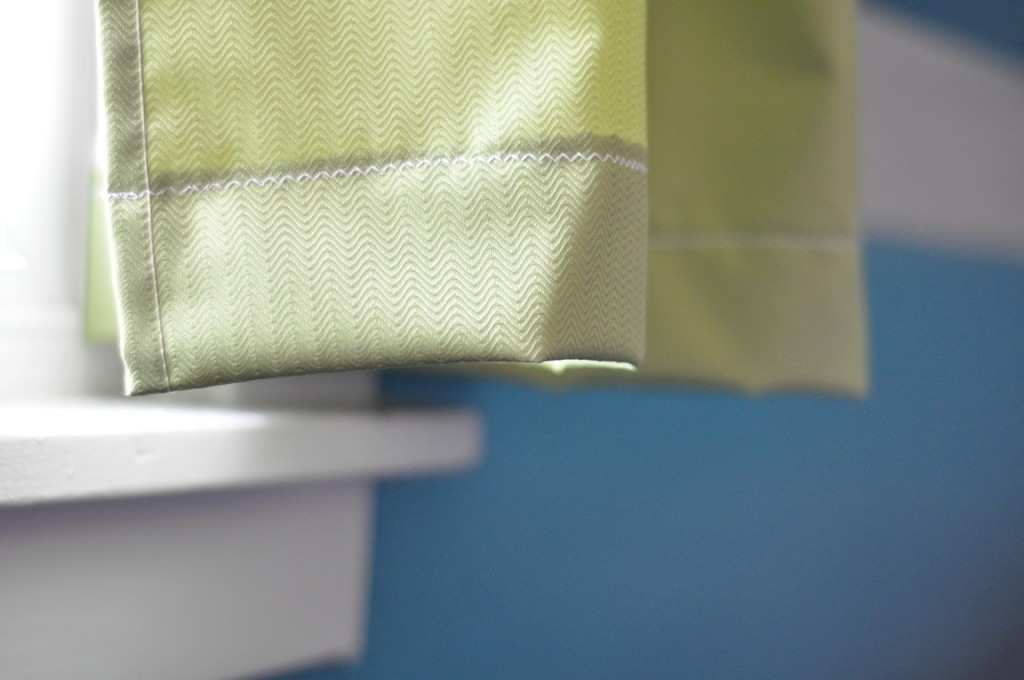 This is an example of the clean lines. WOW. That tutorial WORKED. 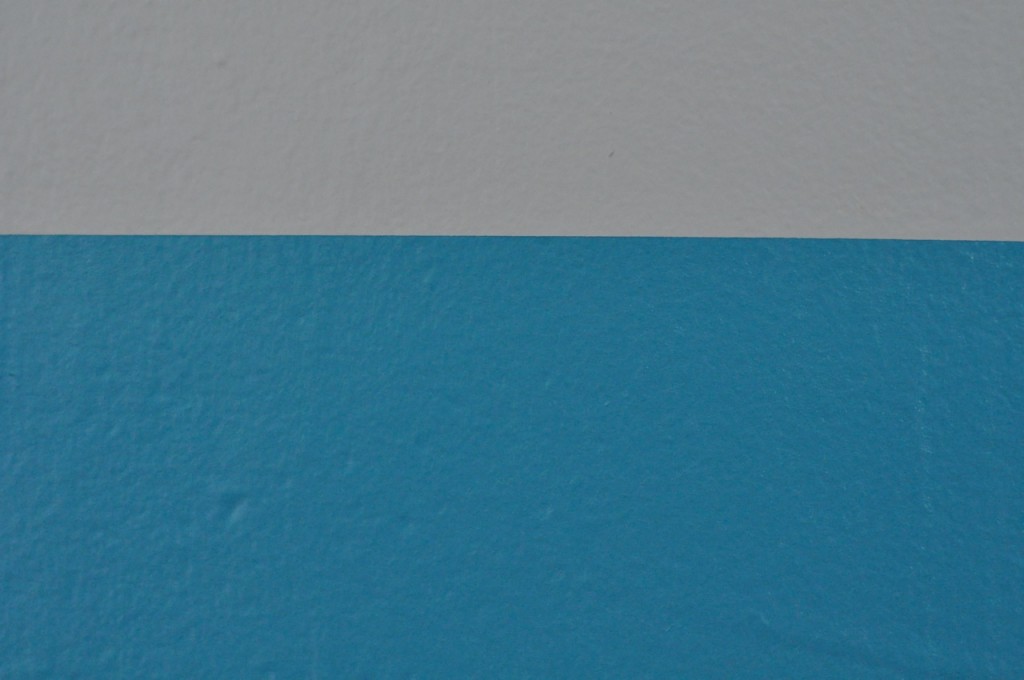 I didn’t come into my robe-wearing days til I got married.
Corban, however, loves wearing his robe. 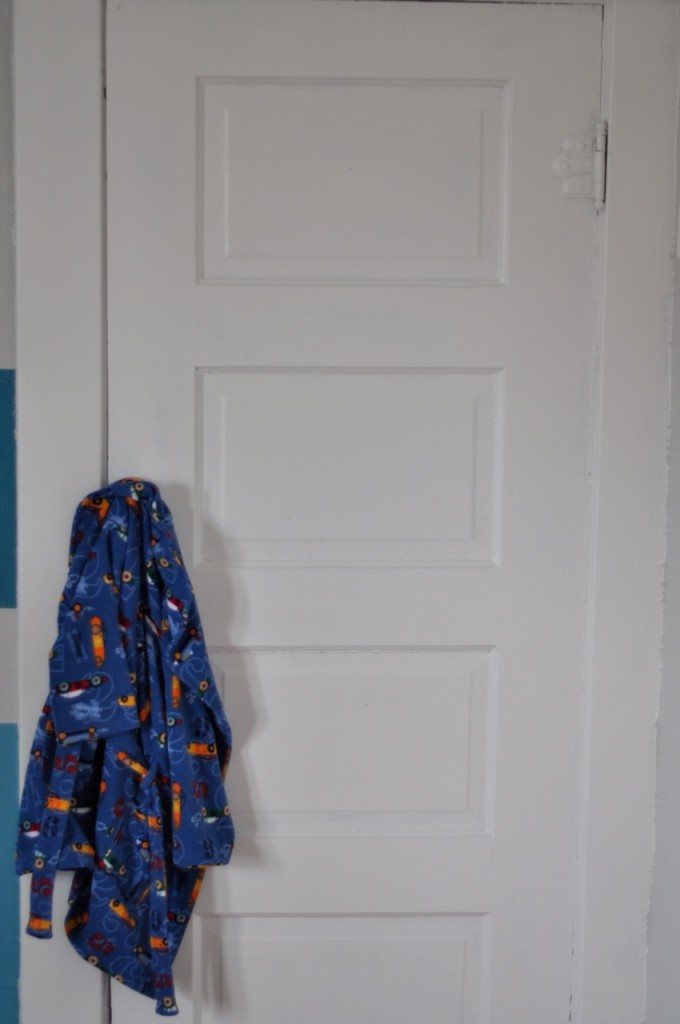 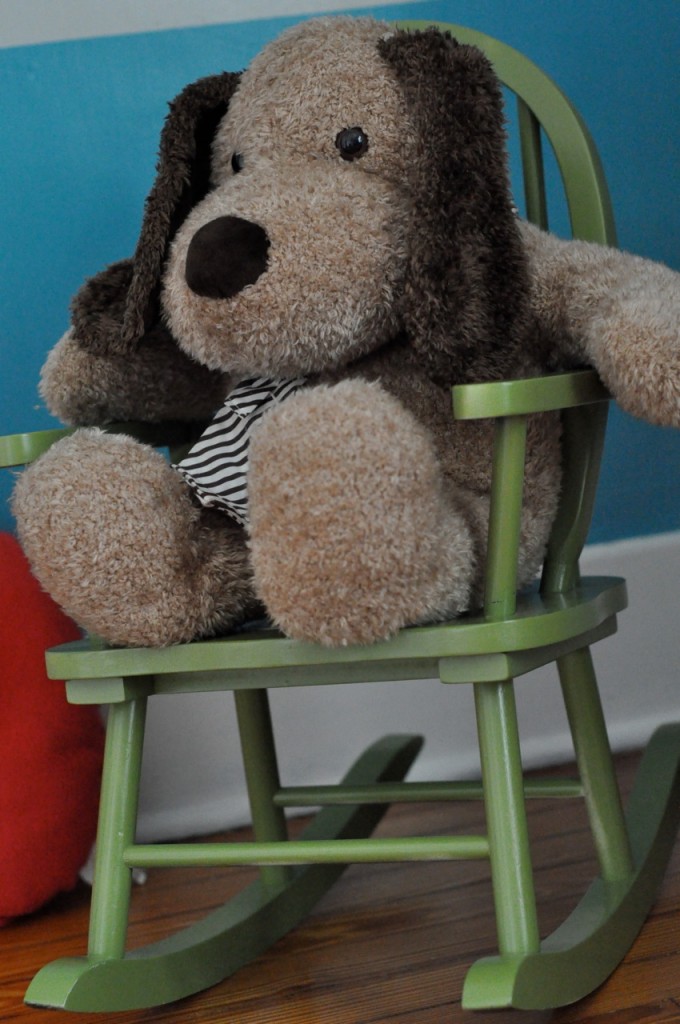 Some shoes are feminine, others masculine.
I actually started writing an alphabet book based on these letters.
Maybe I’ll pick that up again now that I have daily inspiration… 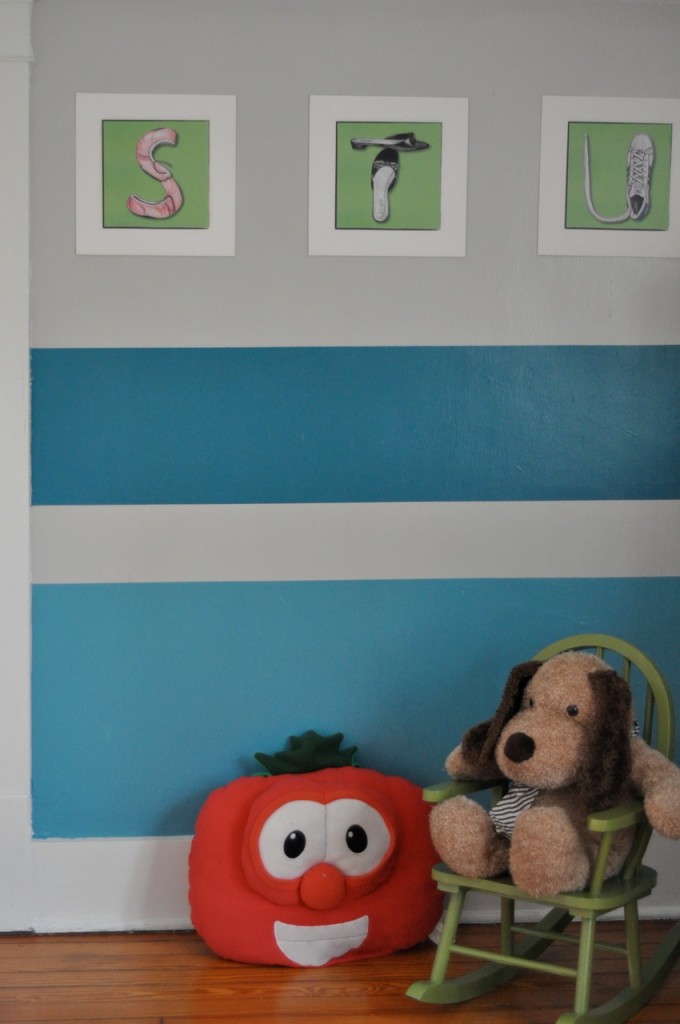 I moved the wire rack, although I don’t really feel like it’s serves much purpose right now… 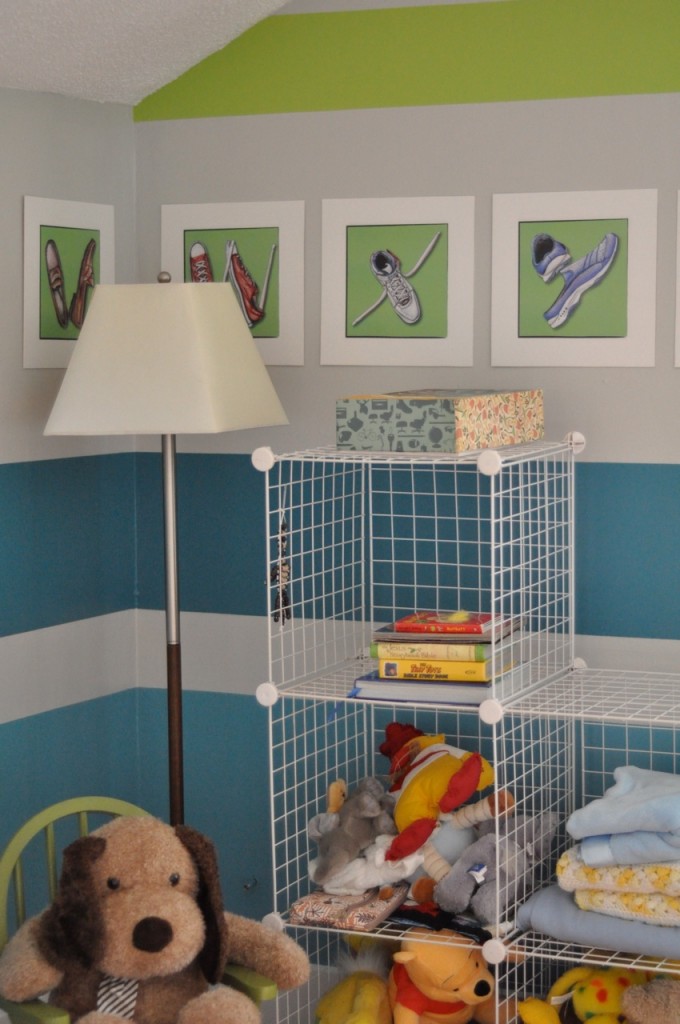 Looking for a different rug. Not sure yet what I’m looking for. A 3’x5′ is all I know…
And eventually an actual bedframe and not just the trundle (but thanks, neighbors, for it!!).
Oh. And that comforter and sheets? It was James’ was he was a boy. How’s that for Lands’ End quality?! 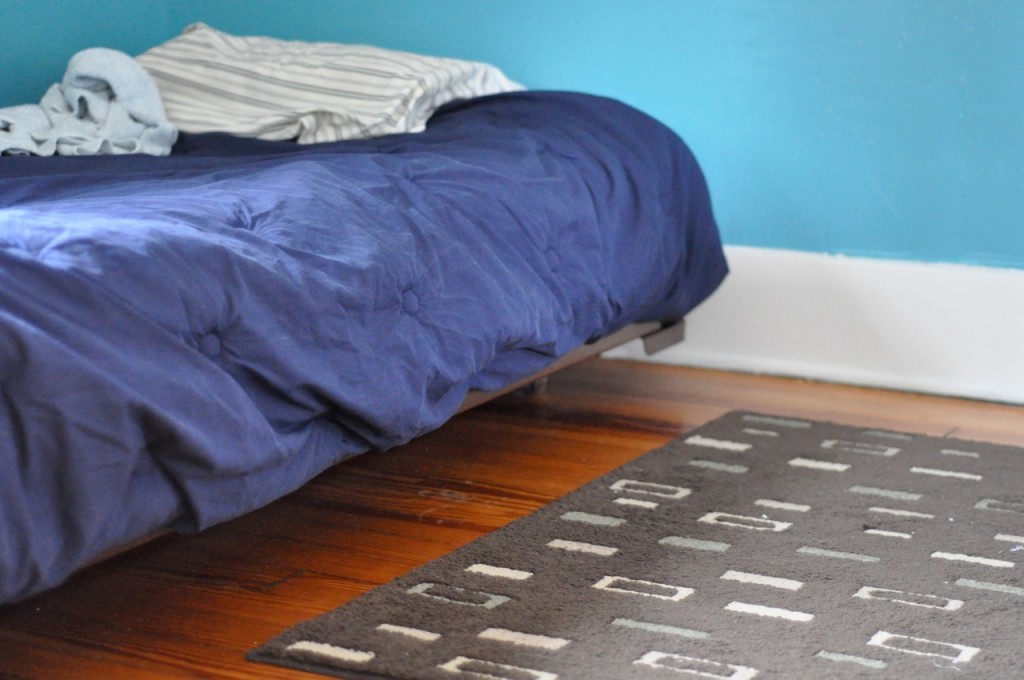 And one last look. It’s a bit bolder than I imagined…I think. But James loves, so I love it. 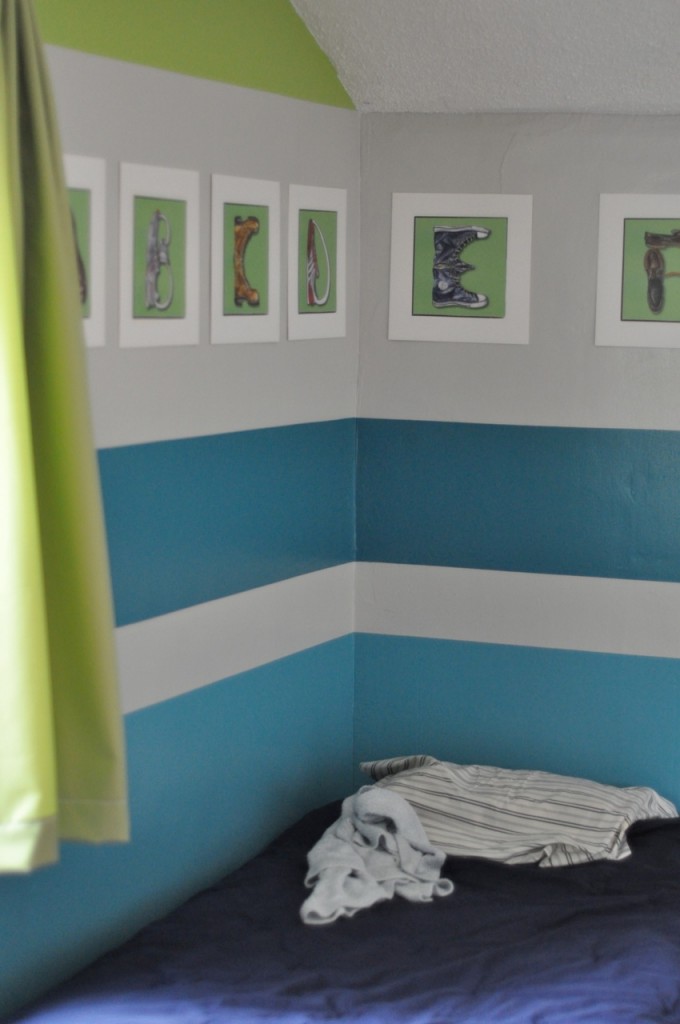 Oh. And Corban loves it. Watch.