18 Apr The basement’s back!

Posted at 21:23h in House by The Redheads 2 Comments
0 Likes

What a long road this has been. We lost use of our basement as a regular living space February 2014 due to leaky walls, found it flooding again due to a sewer back up (twice in three days!), and discovered our water heater flushing itself during Liddi’s birth. Let’s just say it’s been a ride. But the ride hasn’t been for naught; the Lord has been on His throne, carefully orchestrating a Work of the Heart. Once I realized the basement would be out of commission for the long haul, I started to meditate on what the Lord would have me learn through this. As my friend Jen says (which is based on this John Piper article), “Don’t waste your trials!” I certainly wanted to learn this lesson the first time around!

Lessons are funny things. They’re rarely New Information. They’re seldom Things That Have Never Been Thought. And yet, somehow they manage to change our lives, shift our focus, and soften our hearts. All from Things I Already Knew.

I think the biggest thing I’ve learned is the discipline of Dayenu. (It’s from an old Jewish tradition that we celebrate with friends called a Seder.)

Dayenu (die-yay-new) is Hebrew for it would have been enough. It’s looking back through all that God has done for us and recognizing that had He stopped at any moment, dayenu. As the Seder lines read: Had He divided the sea for us, and had not drowned our oppressors, DAYENU. Had He drowned our oppressors, and had not provided for us in the wilderness forty years, DAYENU. Had He provided for us in the wilderness forty years, and had not brought us into the land of Israel, DAYENU. Praise be to God that it continues through til the death and resurrection of Jesus and the giving of the Holy Spirit. Because although it would have been enough in that God owed us no other things, no things at all, had He not given us Jesus, we would be without eternal hope (or at very best, under the heavy burden of the law and sacrifices).

And while basements and play spaces and hosting family members and watching movies as a family are surely at the bottom of a list of important things God has given us, it’s still on my list of thankfulness.

Pretty sure this is not a lesson I just get to check off God’s objectives list for me. Preeeetty sure He doesn’t operate with one-time-in-your-life lessons. But now that this tool is firmly rooted in my heart, I am more equipped to practice it the next time the basement floods/furnace breaks/mold grows/kids get hurt or fight or disobey/husband loses job/baby is sick/ETC. Every new happy moment is just icing on the cake. Because. He is already enough.

Okay.
So.
Wanna see the basement?

We decided to go with this bright white carpet.
Really brighten up a basement, ya know?
Psych.
Puleeeease. That’s the other lesson we’ve learned.
No carpet in the basement.

We went with these foam tiles, thanks to a local recommendation.
They’re soft, provide another layer of insulation, and still look classy and modern.
Plus, they float on top of water.
Hehe.
A perfect fit for a basement!
And a great material for working out on to.
Not that I would know anything about that.

So here’s how it went down.

The boxes were plopped on our front door step.
I plopped them to the top of the stairs. 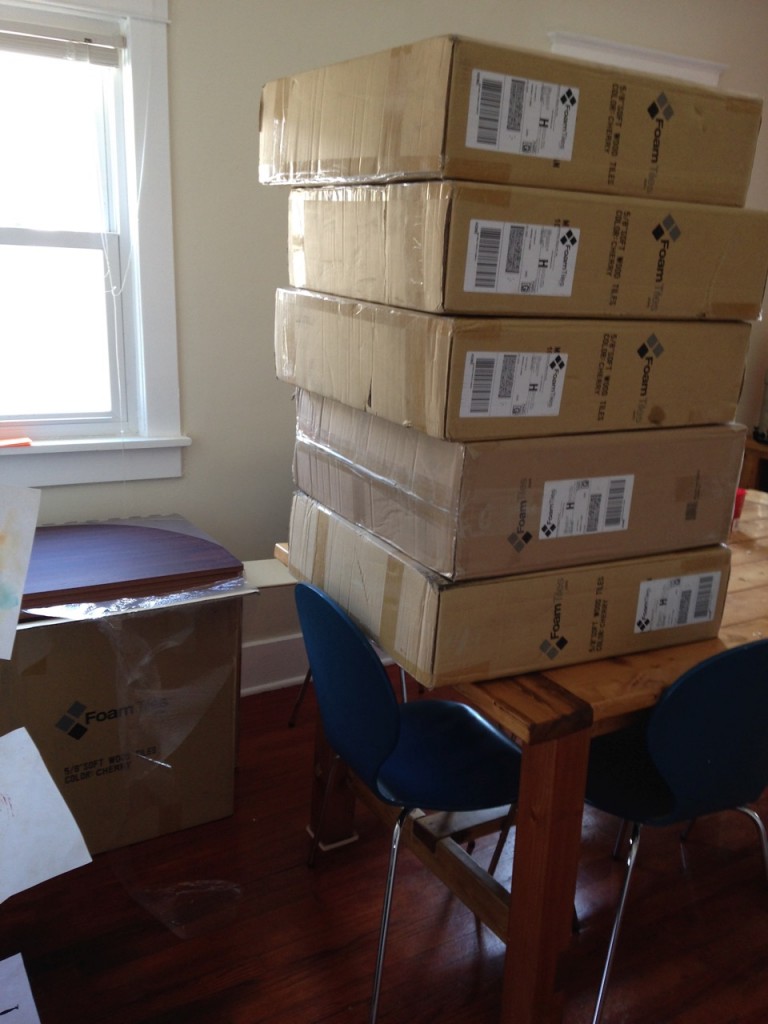 James started installing the puzzle pieces.
Against our not-as-straight-as-we’d-hoped walls.
Just about every tile had to be cut.
Which is utility knife easy when it’s foam. 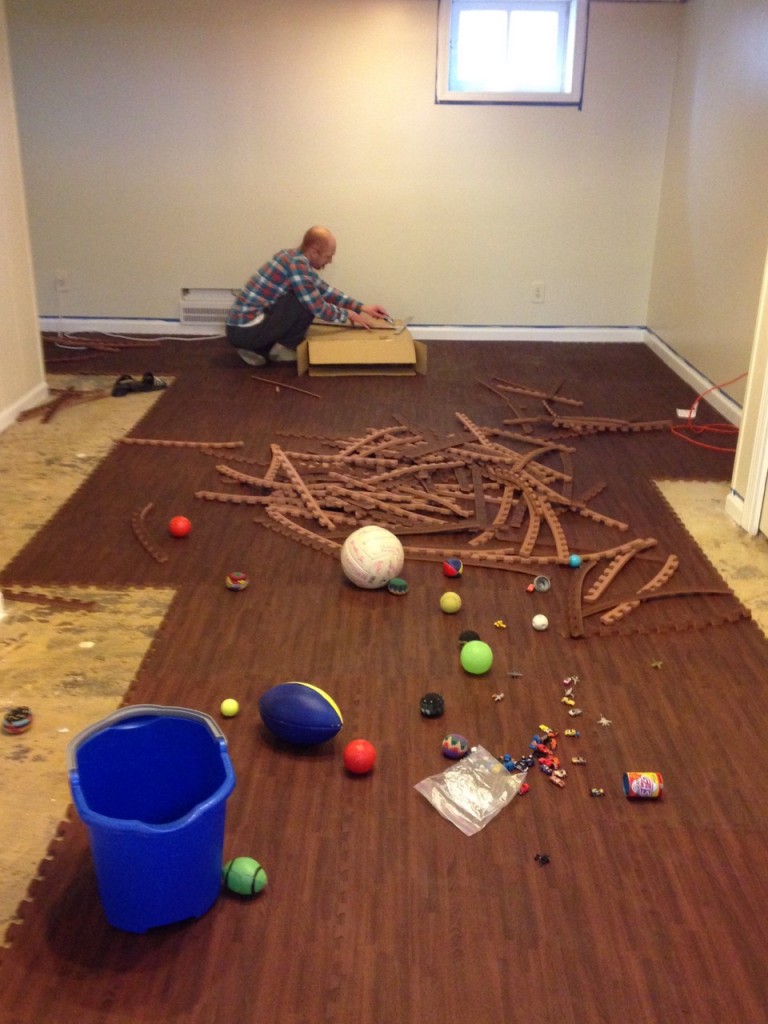 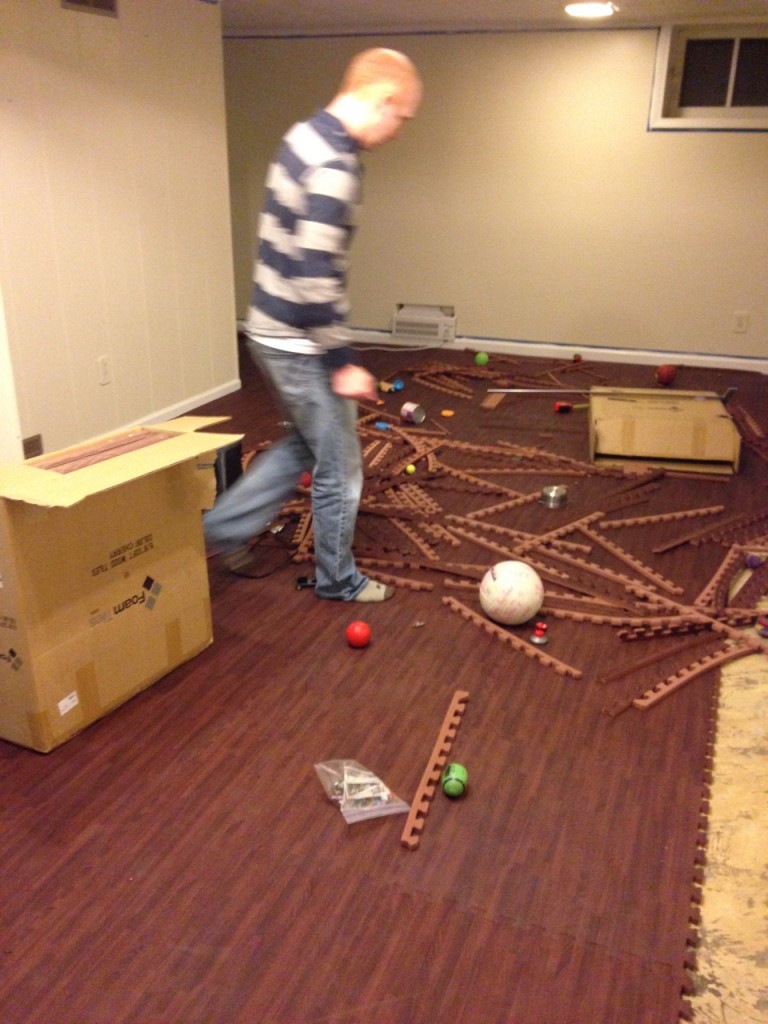 A whole completed section!
The kids played down there often
while James was working. Can you tell? 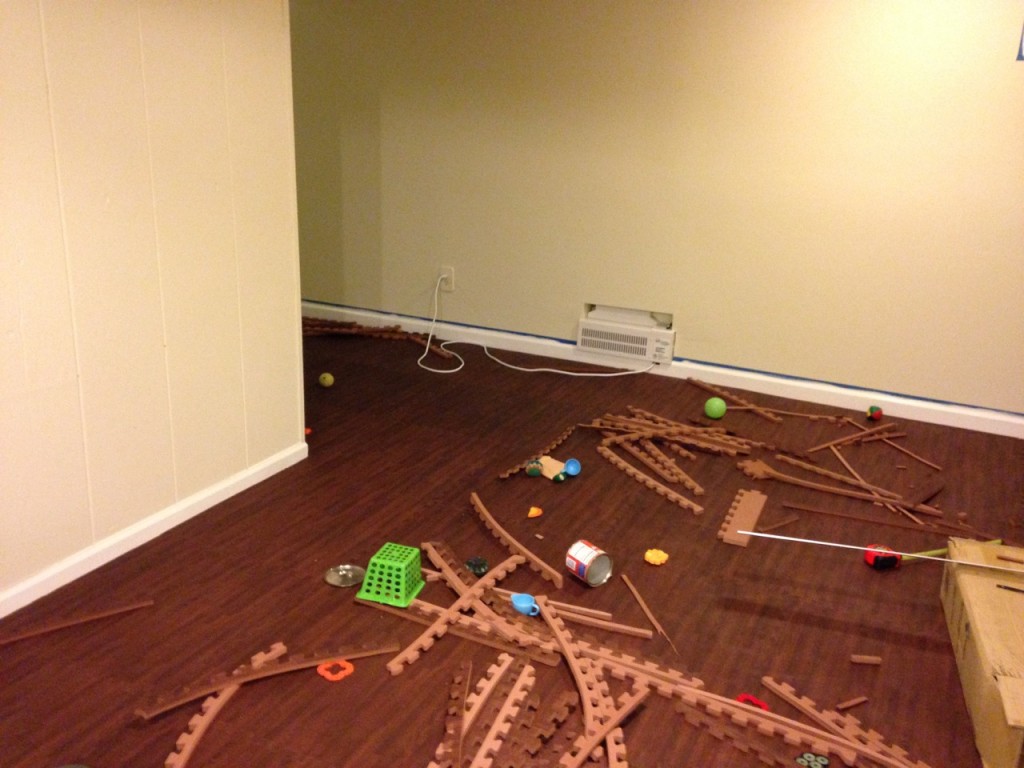 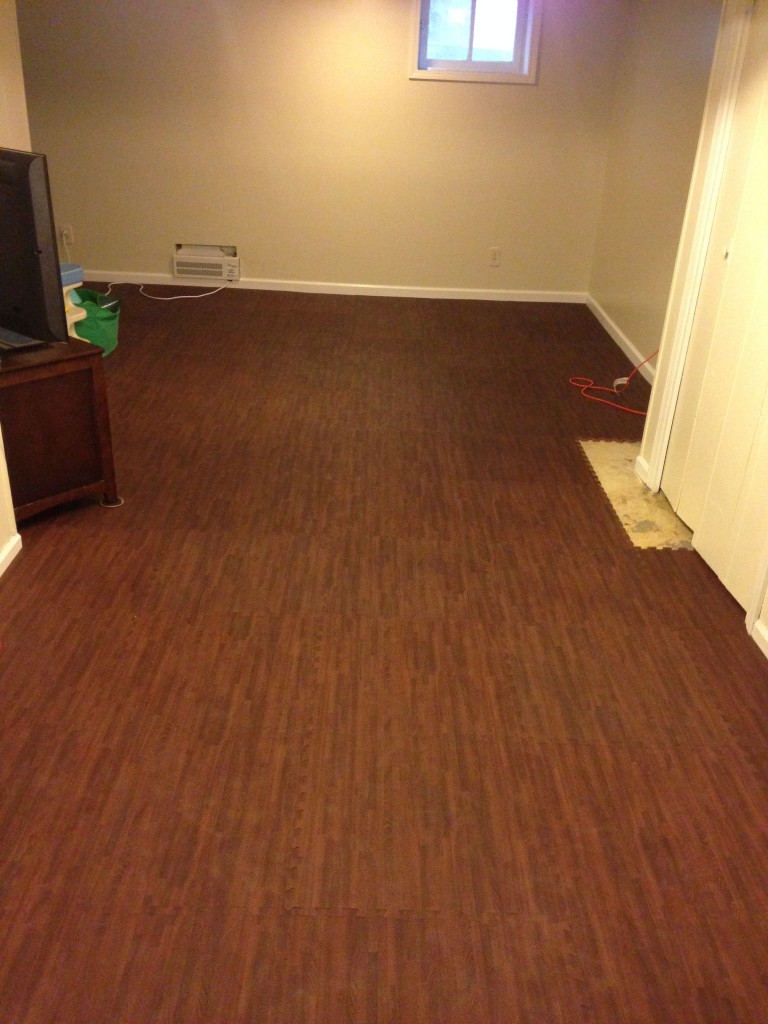 We moved the couch down there anyway. 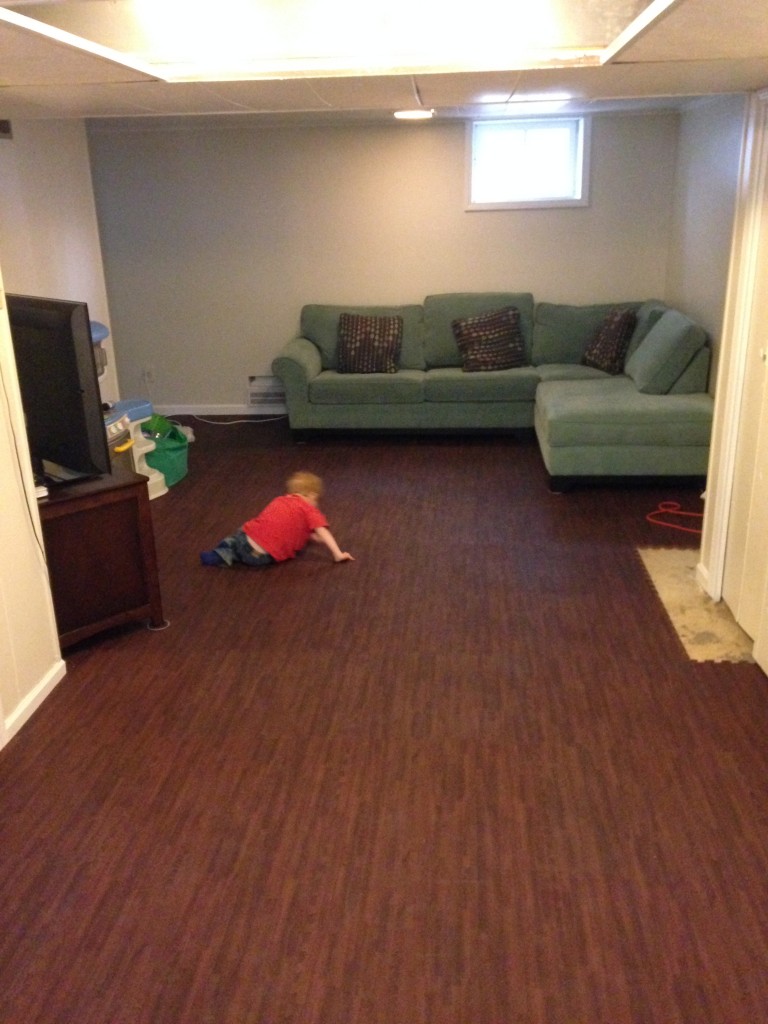 Never fear, the tiles arrived two days ago
and were installed this afternoon. HOORAH! 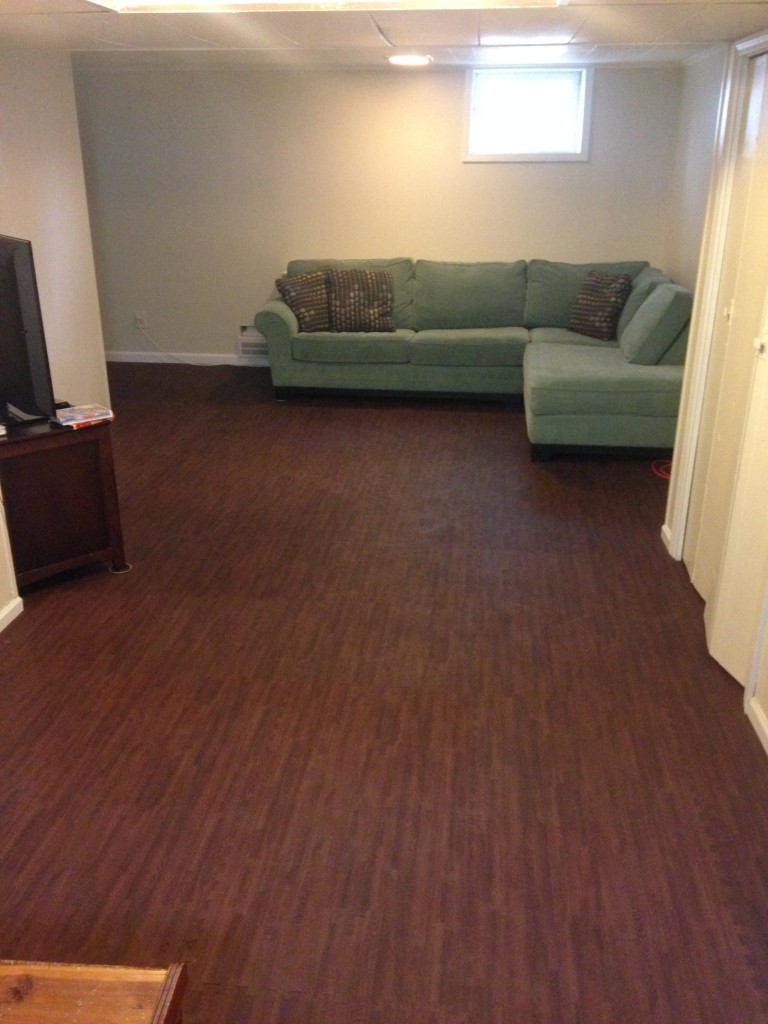 Matt came for most of his spring break
and put the shelf back behind the couch
just as he’d done when we’d first moved in. 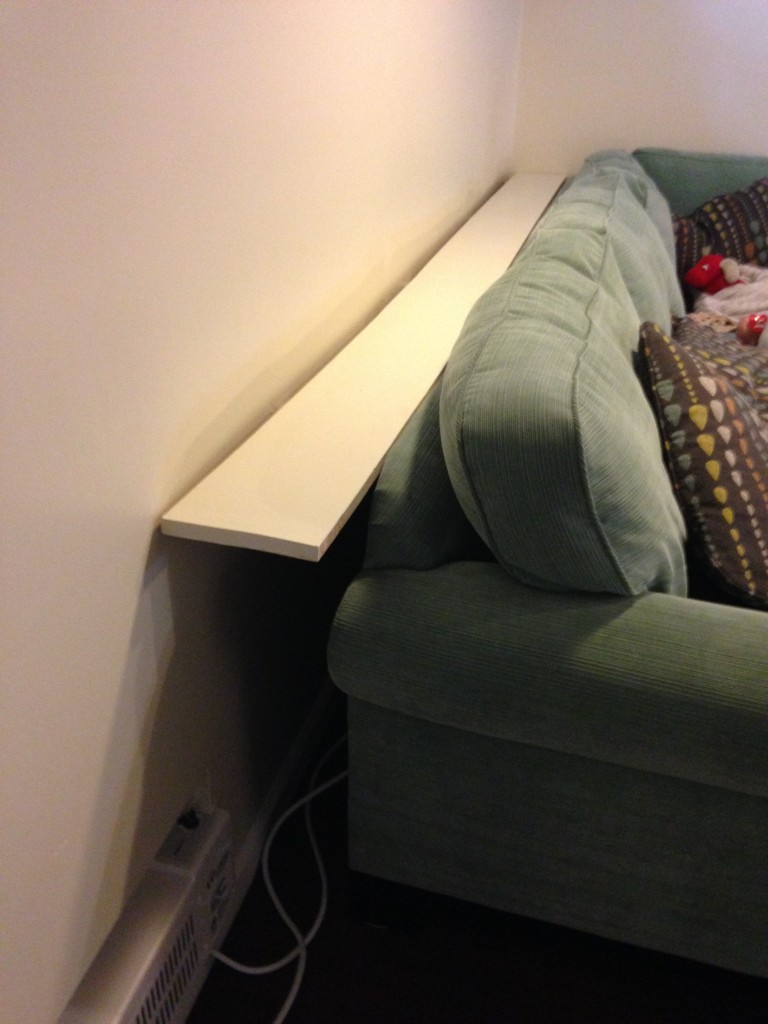 And, check this out!
This is the old Uncle Ben corner.
We’re totally using it as a little playroom!
This is the first time the kids will go down
and play…without me. Excuse me while I pause
to smile and stare off into the silent distance.

So all this basement news means…our living has found some breathing space!
This is our first time playing around with this set of furniture (thanks, Mom and
Dad!), so rest assured it will be rearranged in the near future. I have a condition. 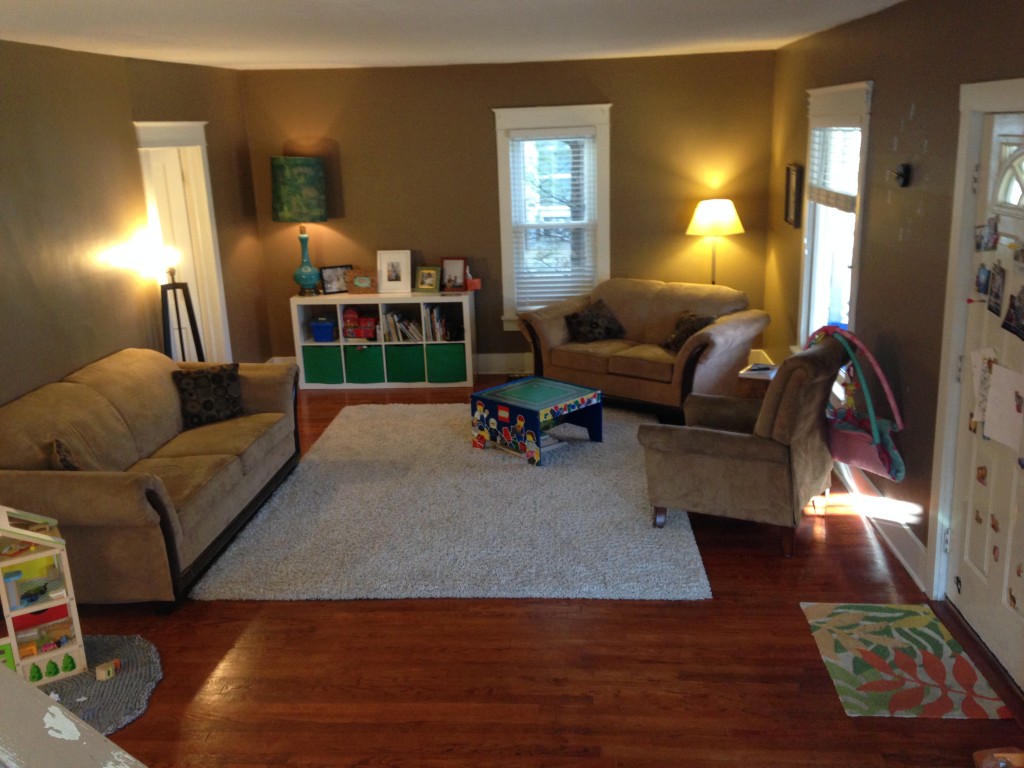 Isn’t God kind? To use this life to draw us to His life. To use something meaningless to show us true meaning. From my first moments of this is no big deal to I’m so glad we can pay for this fix to this fix is much more expensive than we thought to why can’t we gain traction on this? to we’ll prolly never have a basement again to woe is me to okay, this isn’t sooo bad to we really don’t need our basement to basement, what basement, we already have more than enough. It’s been a much harder road for I Like My Stuff Me than Everything is God’s Anyway James, but it’s a road I’m glad God led us down. Truly.

I’m also really glad we have our basement back.