Posted at 08:50h in Pregnancy by The Redheads 0 Comments
0 Likes

1. My hip pain continued to increase until I was at a breaking point two weekends ago. The most severe pain is while sleeping, which is also when your mind is most susceptible to discouraging thoughts. Really hard to fight back when you’re barely awake. Up every two hours or less, finally get up to take a bath to ease the pain, go back to bed, for a couple hours til morning. Hard on body and mind. I finally gave in and got some Tylenol PM one night and BOOM, barely remember getting up to use the bathroom! I used a half dose that Tuesday night with just as much success, so last night I was feeling brave and used…none. I don’t fully regret that, not my worst night of sleep ever, but I decided to do another half dose over the weekend since we were traveling.

2. My regular chiropractor was out for a week, and I just couldn’t wait. So I contacted local Miracle Worker Aaron Wilson to see if he could squeeze me in. I have too many things to say about just how different his approach to chiropractic and overall care (very holistic) to say on our little family blog, but I will say we may be making the switch for good.

3. I’m having lots of practice contractions these days. Nothing painful, just exciting–we’re closing in on the final stretch! Still loads of baby movement, though. Midwife Shannon says there’s plenty of room in there and that so far, baby’s not too big. I like it.

4. Baby engaged last week. That was pretty exciting! If I wasn’t waddling before, I certainly am now; holy pelvic pressure!

5. Something happened to James and I January 1st. We looked at each other and said, We’re having a baby THIS year. NEXT MONTH! And we kicked ourselves into gear. We each have lists of things to complete before baby arrives. Some directly related to baby (getting diapers out), some out of worry that I’ll never have time to do them again (washing windows). It’s kinda hard to feel that nesting desire and simultaneously be in pain to move and be in a constant mental fog from lack of sleep. My friend Julie has been a constant encouragement toward choosing joy, taking midnight waking moments to thank the Lord for this new life, etc. It’s not the easiest choice, to be sure, nor do I choose it every night, but it’s something I strive to remember.

6. Corban and Jaeda have been in baby overdrive since we got the newborn diapers out. They’ve been diapering their “babies” (aka stuffed animals), rocking them, feeding them (milk only), laying them in the crib for naps, shushing each other when their baby is sleeping, starting the process all over. They’ve even taken turns napping in the crib themselves! They’re getting really excited about this new baby…as are we!

7. James and I may be closer on our names; that feels good!

8. Normally by this point, I’m pretty done with being pregnant and just wanna meet the squirmy one who’s taken over my body. This time even with the extra pain, I feel like we need every single day, and if anything, I feel anxious about baby coming early. Gotta be the house and two kids effect. Of course, we’re just under six weeks out, so I may change my tune in four+ weeks… 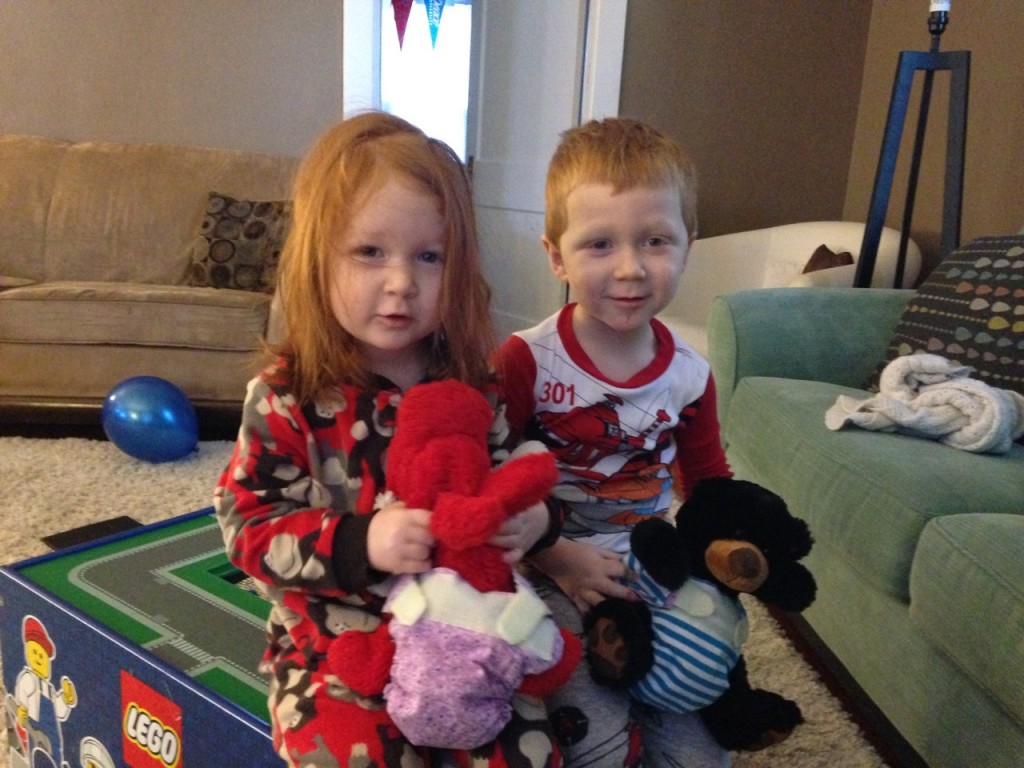