James is an artist. His job, of course, is in graphic design, but in order to obtain that degree, he had to take art classes–drawing, painting, photography–and our house and my James-notes box have greatly benefited from this hobby. It’s his dream to put a little printmaking shop in our garage. Or a giant wrestling mat. Maybe both? Either way, I see my strollers getting pushed out. Every year he designs something special for the Art Gala–a photo, a typography piece, and the like. This year, he decided to make a print. Apparently, this is not a stamp. I repeat, he did not design a stamp! This is called a linoleum cut and is used to make a print. He finds an inspiring photo and replicates it on the linoleum. Then he takes a long time to carve every inch of the design that should not show up. It’s a very long process but one he enjoys immensely–tedious but cathartic. 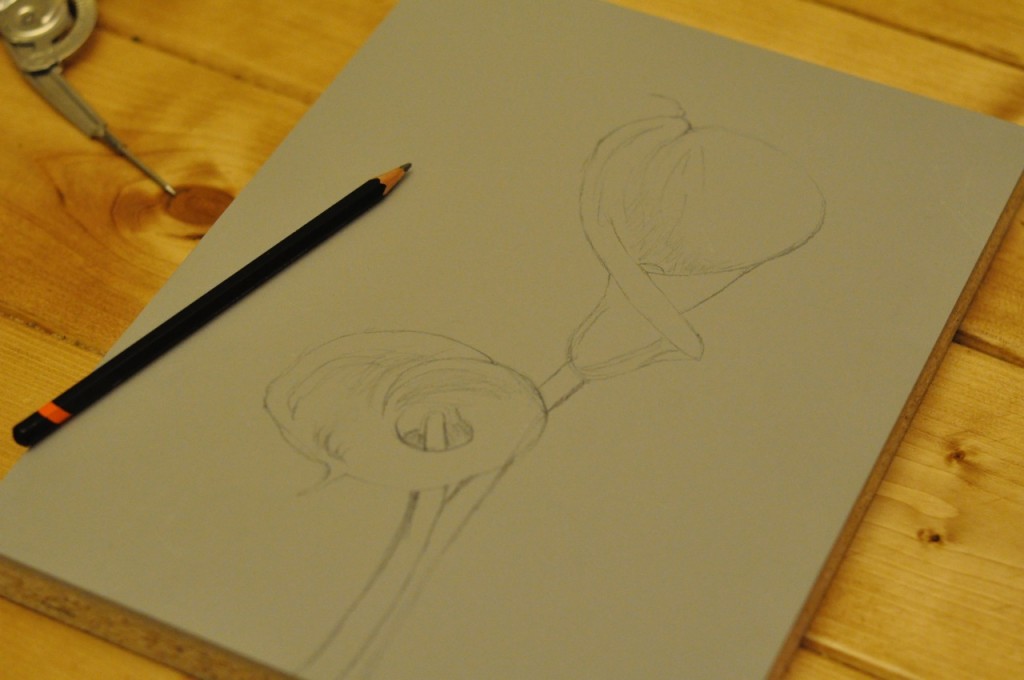 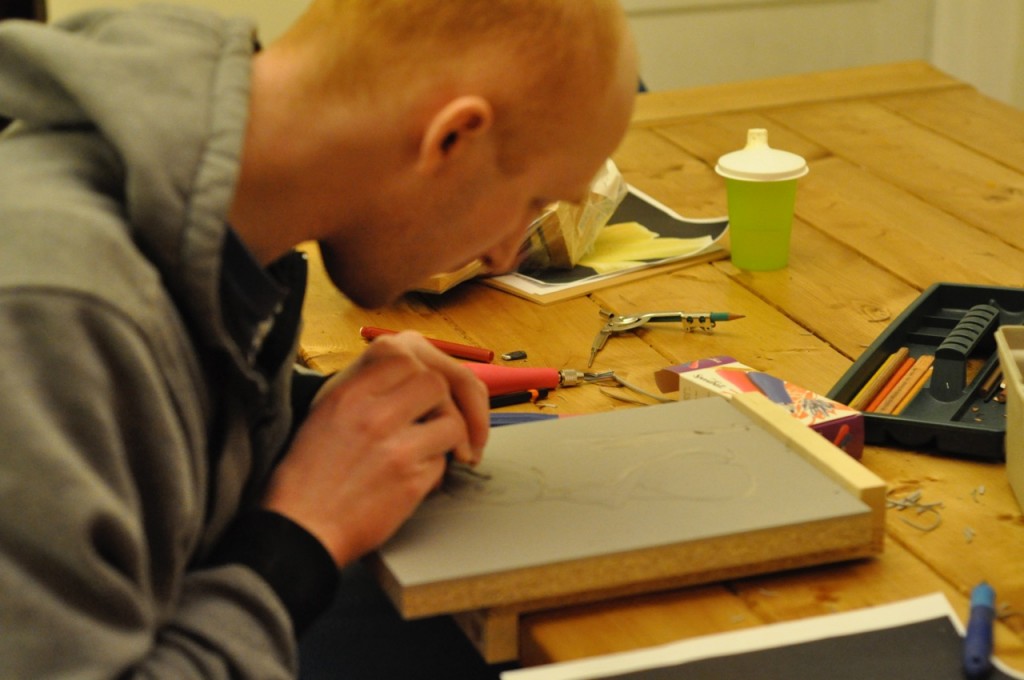 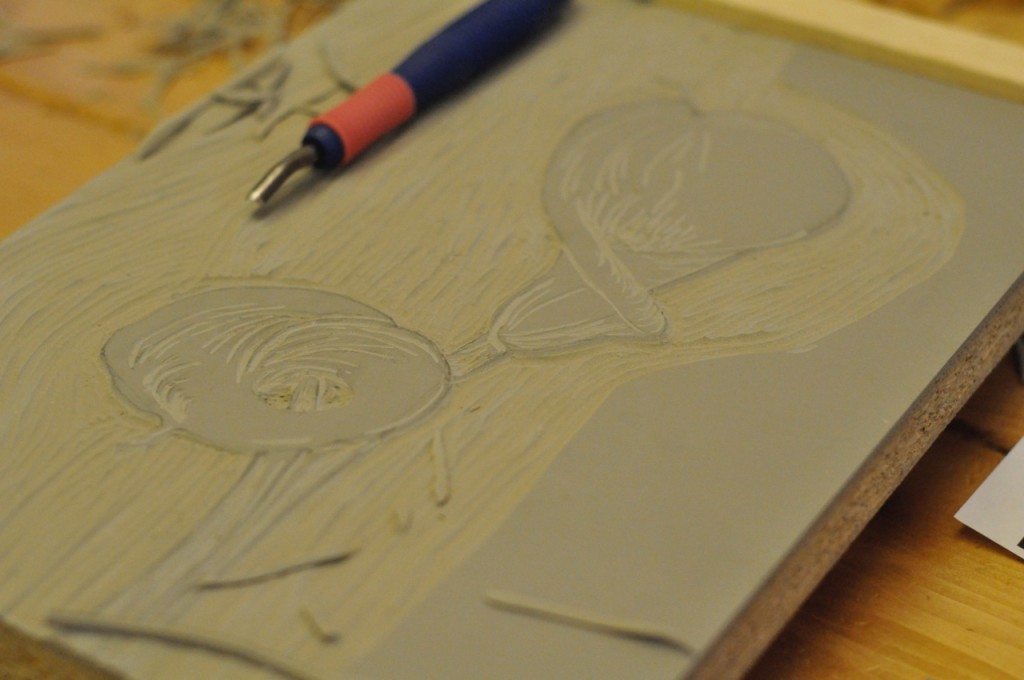 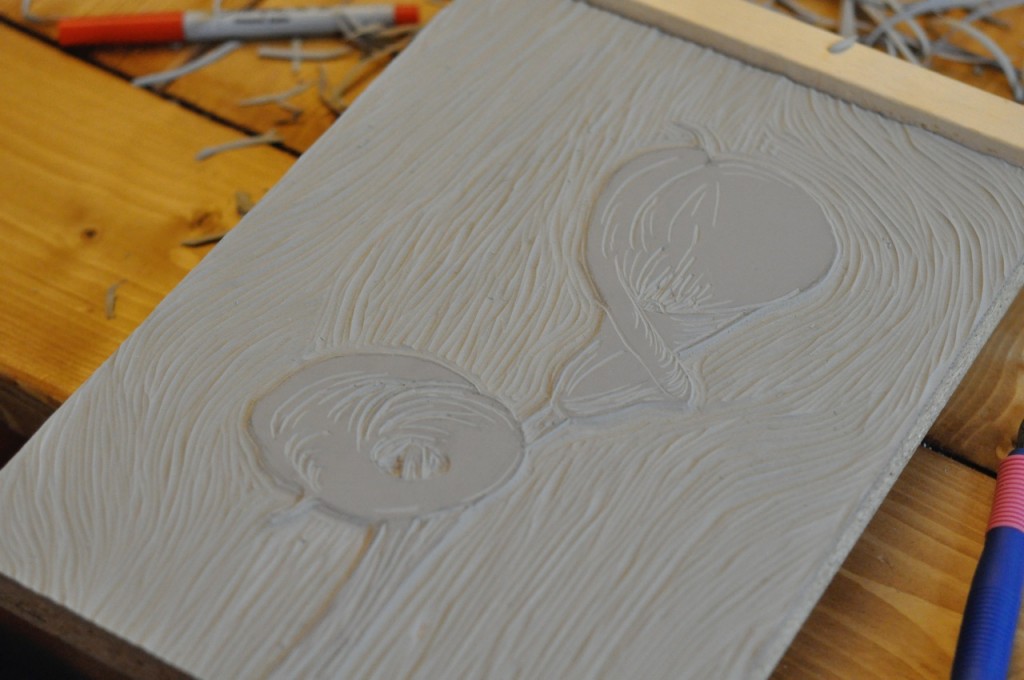 Then he rolls the ink on the board/cut/not-stamp and places the desired paper on top. He completely forgot that he has a round weight with a handle that rubs all over the top of the print and instead used a wooden spoon. (He remembered about said helpful tool moments after he finished…the last print.) 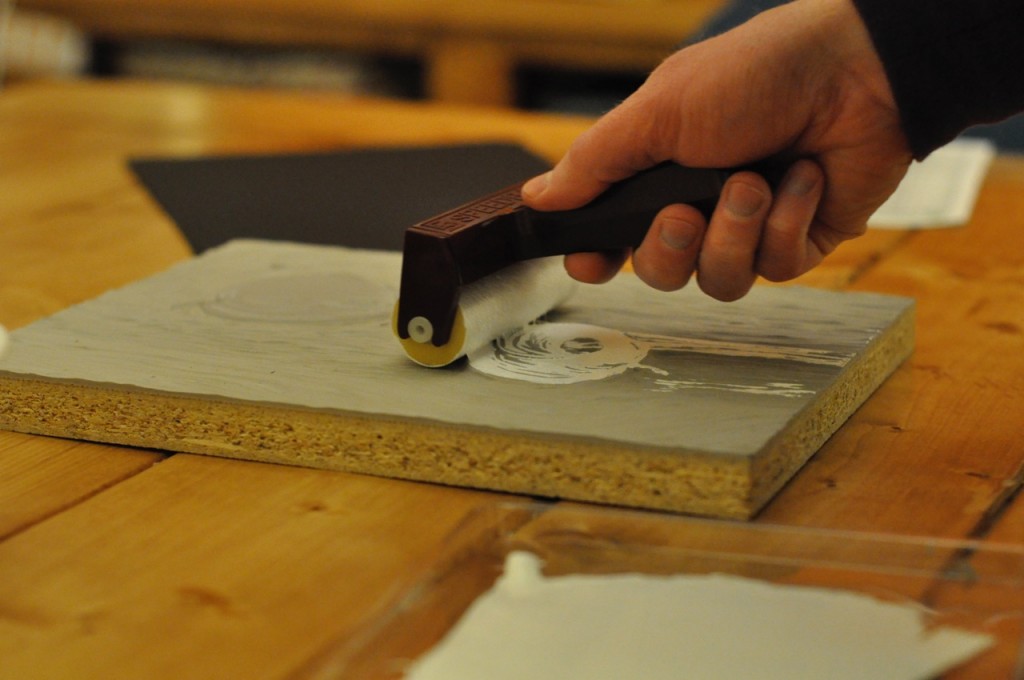 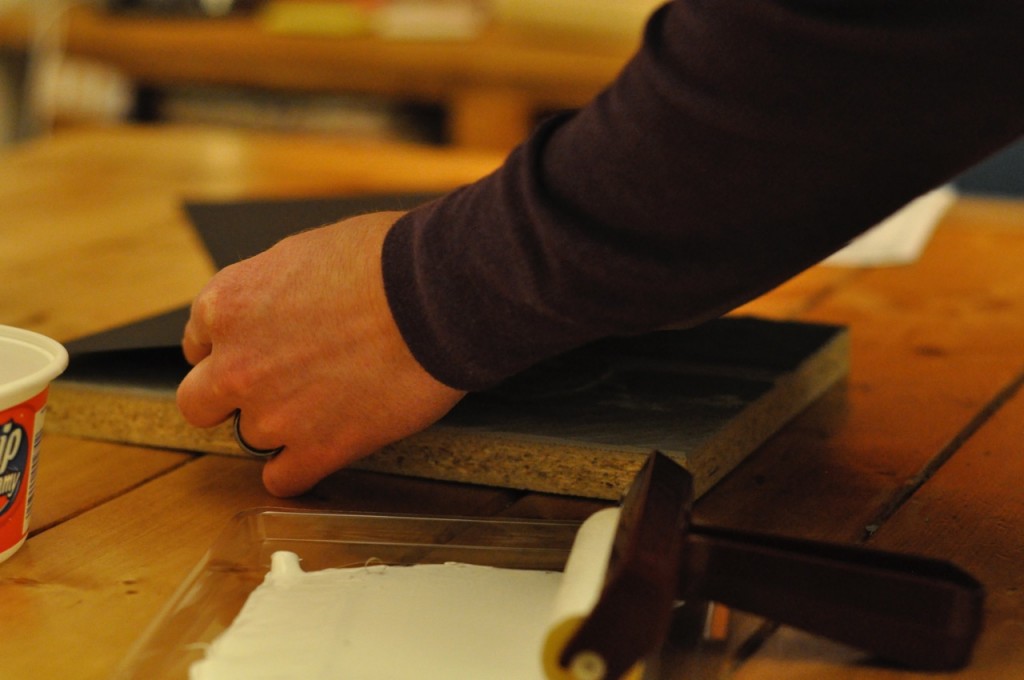 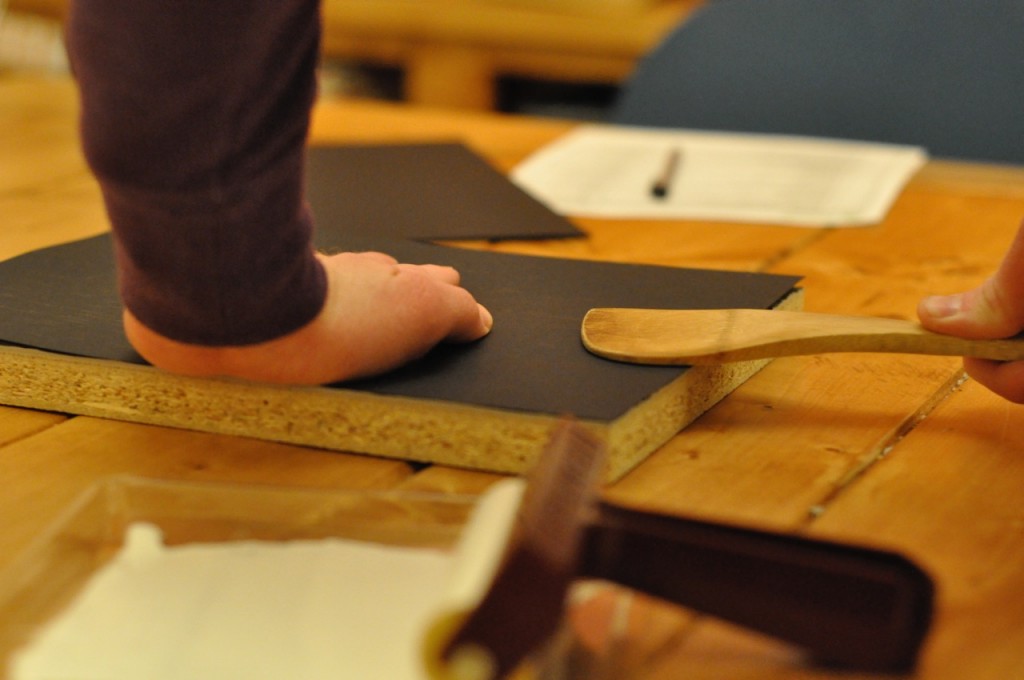 Then comes the moment of truth. One print below has a little too much ink, one too little. It’s an interesting mix of balance and finesse and experimentation, but after making several prints of this one, he decided he wasn’t happy with the bottom calla lily and was going to cut something else instead. And just like that, he moved on. I would agonize and tweak and make it work, but he saw a design flaw (the angle of that lily) and decided to cut a new image. Soo if anyone wants a 9×12″ stamp of a calla, just holler. 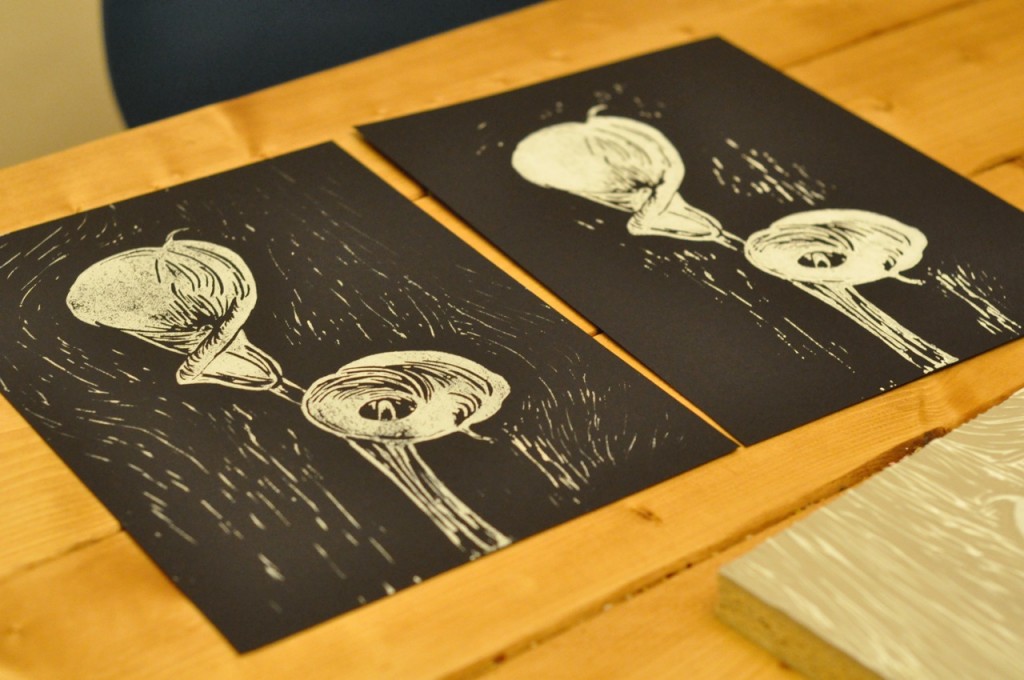 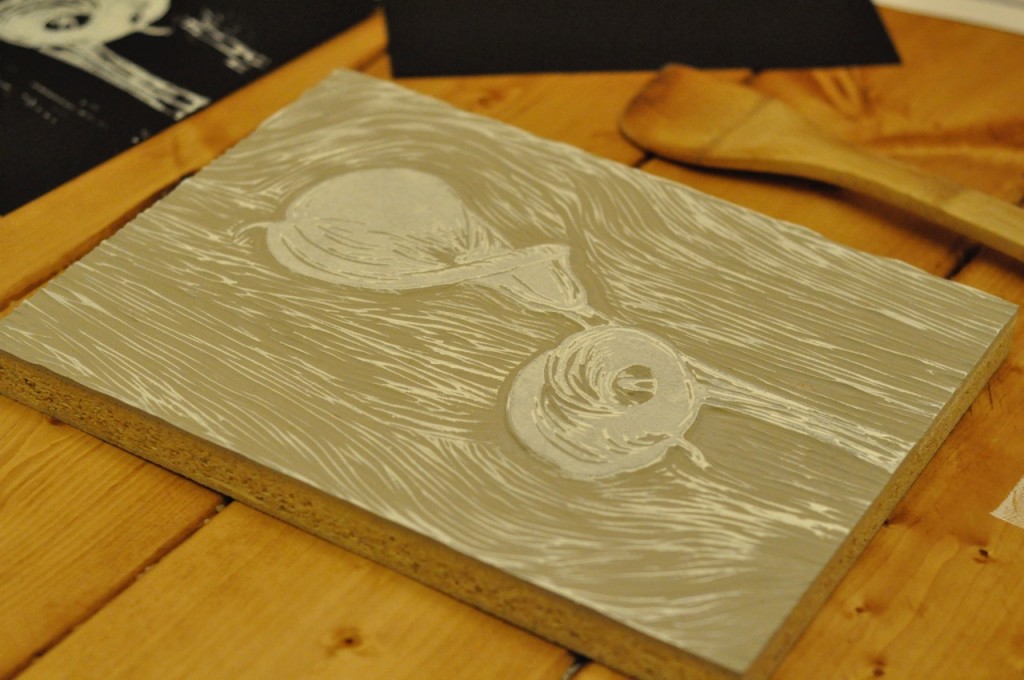 A couple days later, he was ready to try again, this time with a robin. Being a little more complex in detail, it took several days to carve it all out. He made at least a dozen prints before he found The One but not before Corban made it downstairs. “What are you doing, Dad?” James’ eyes gleamed. “Wanna help?” Corban was all in, and he was surely doing it by.him.self. Corban was delighted that his “work” resulted in a product. When he flipped that paper over, the look of wonder and amazement in his eyes was so fun to look at. It lasted about 10 seconds before he announced, “Dad, let’s do another one!” James finally had to cut him off so we could get ready for church. 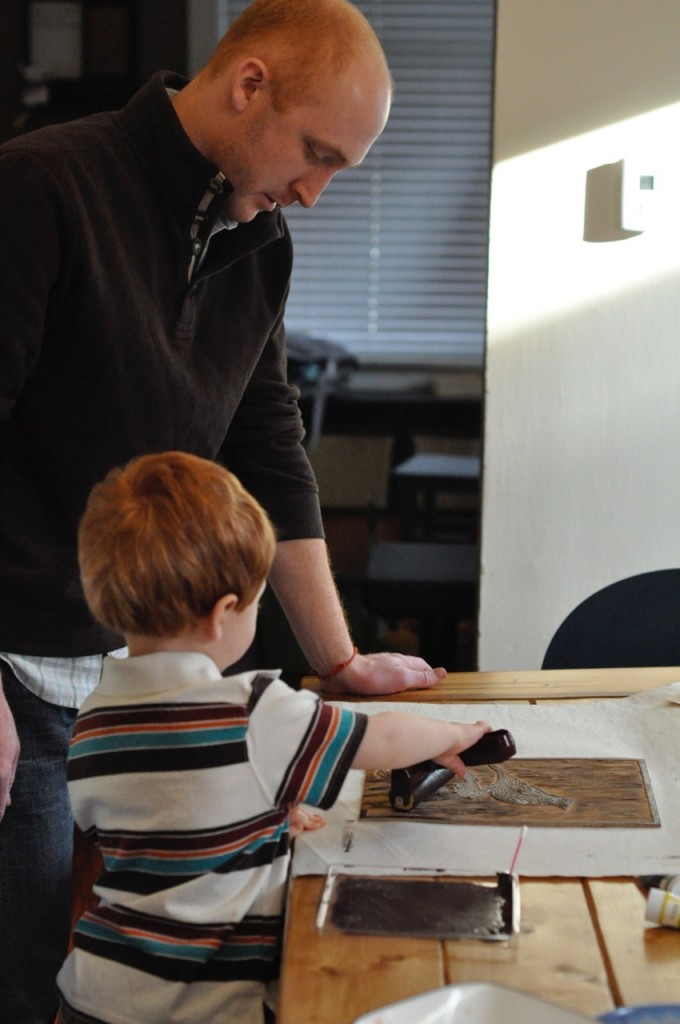 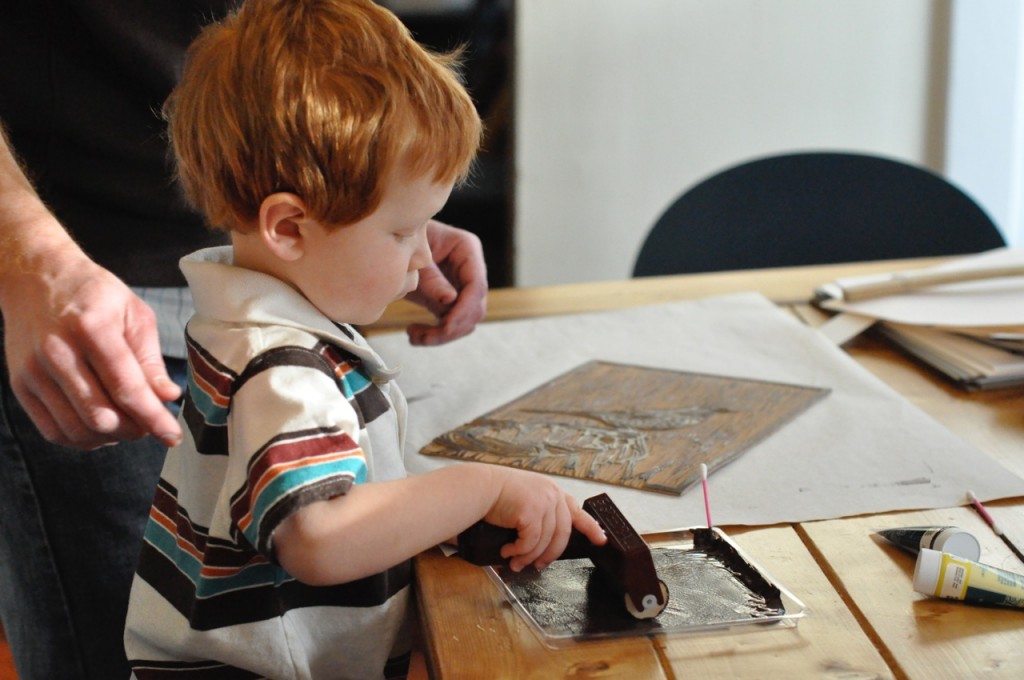 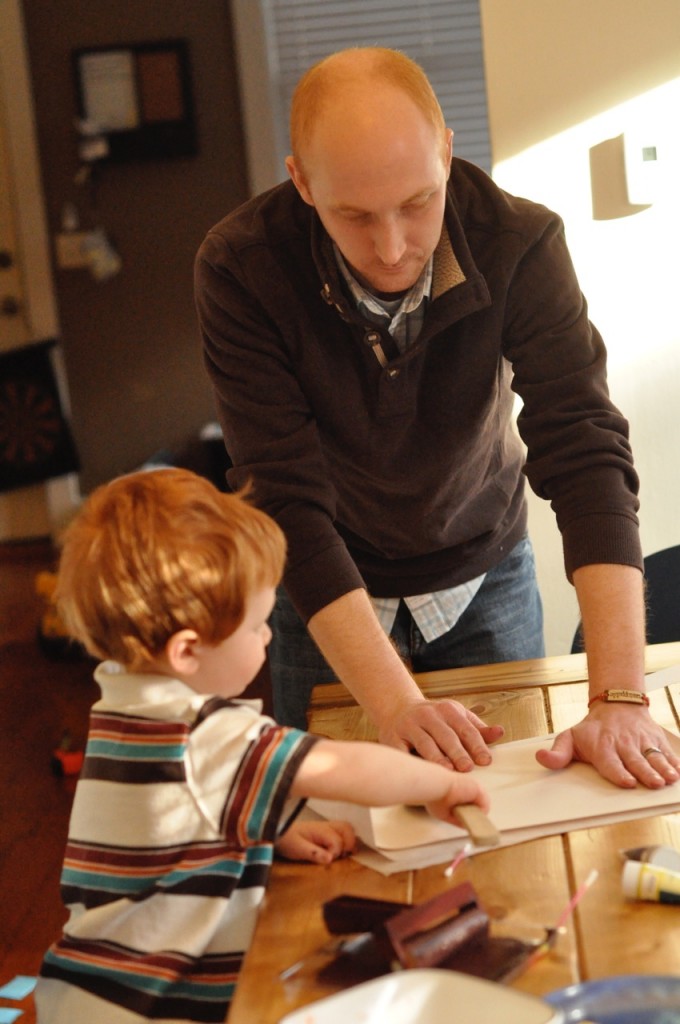 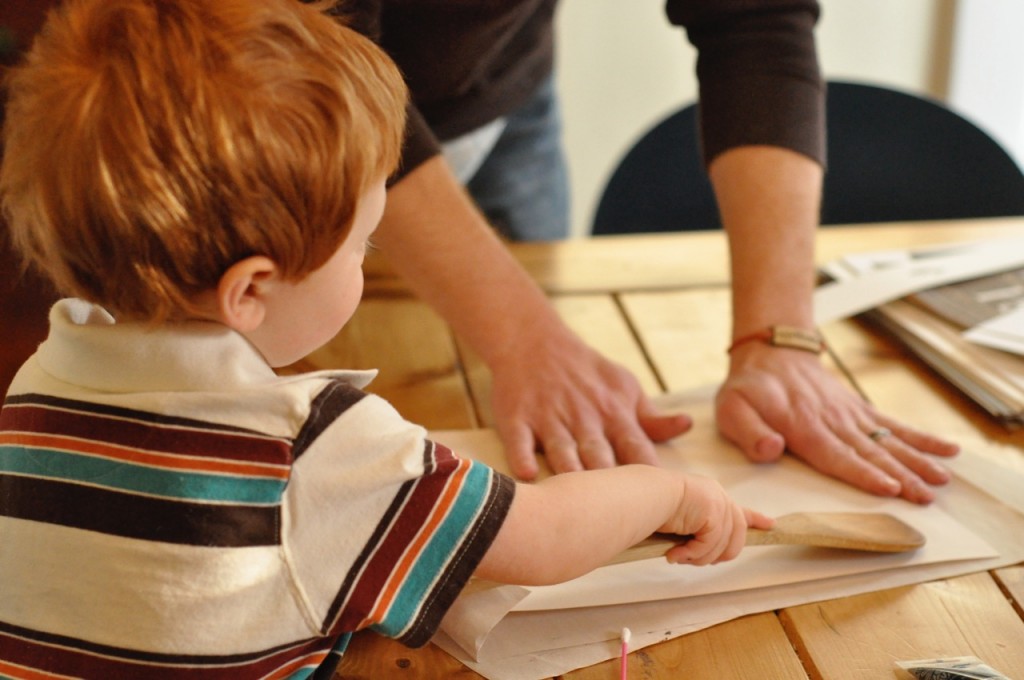 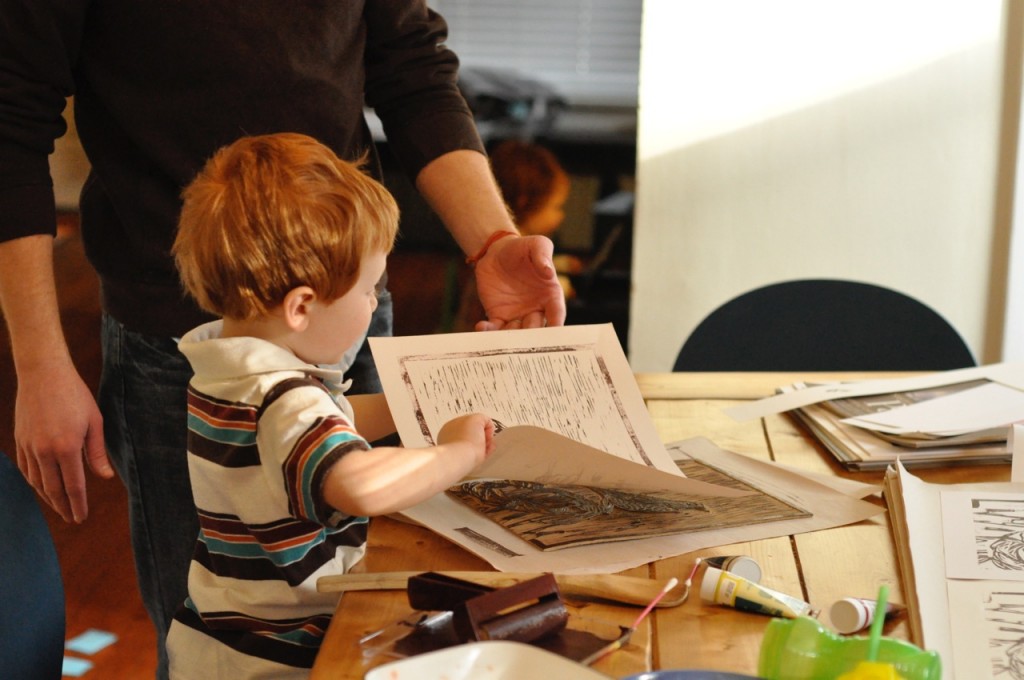 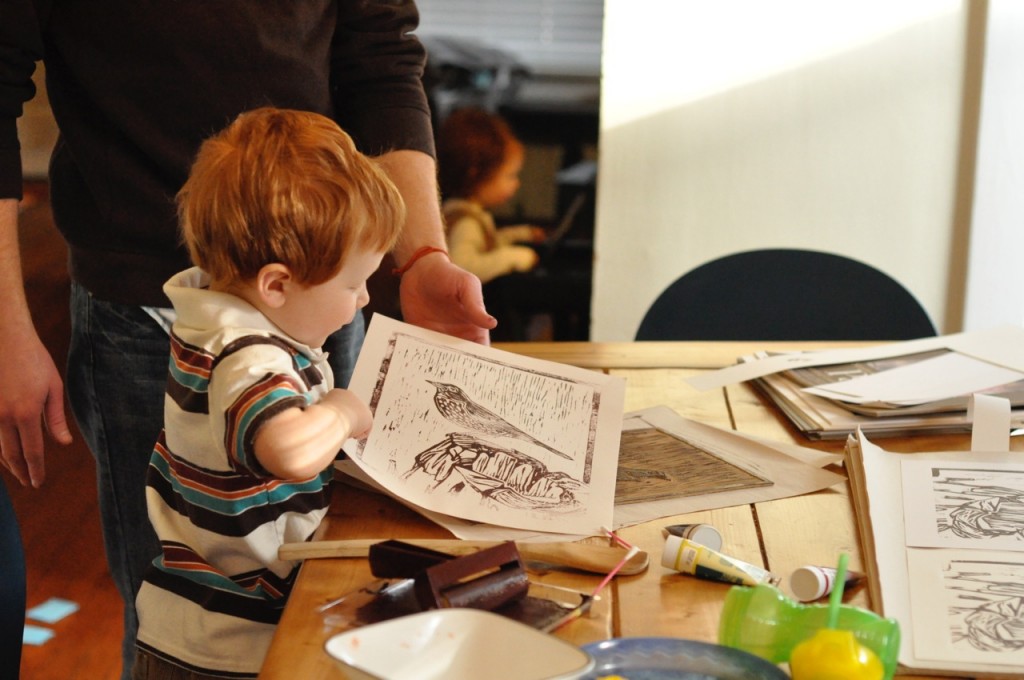 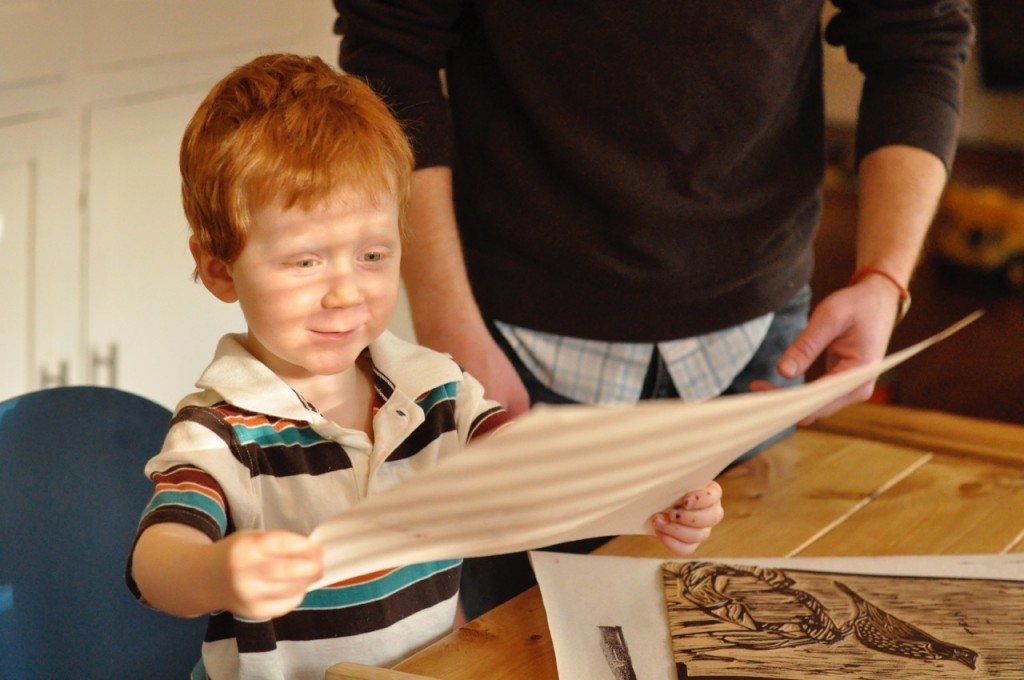 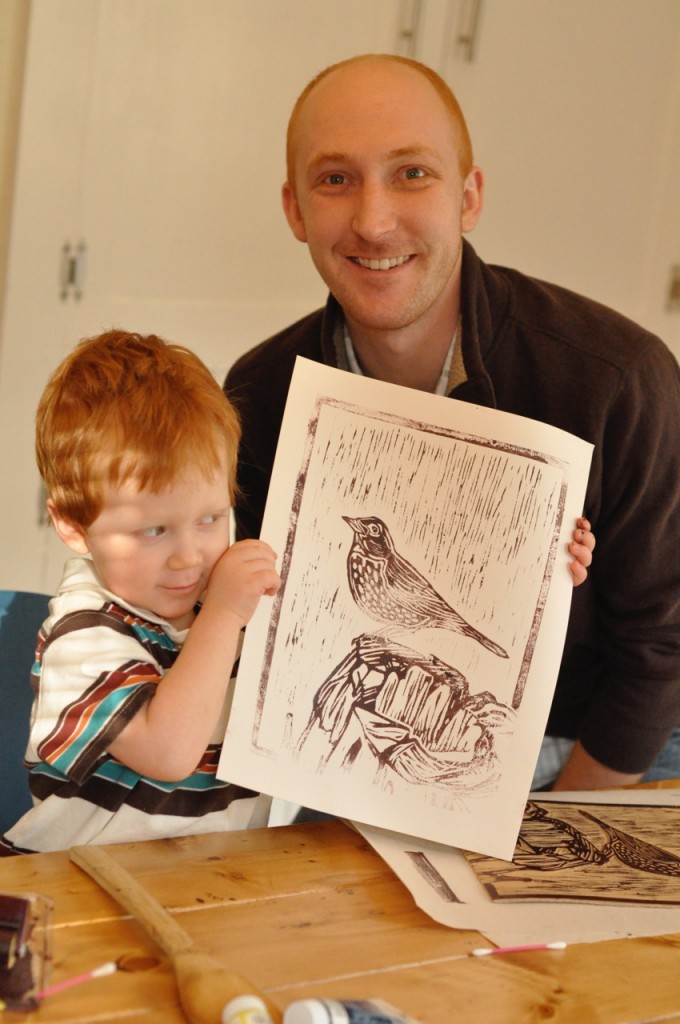 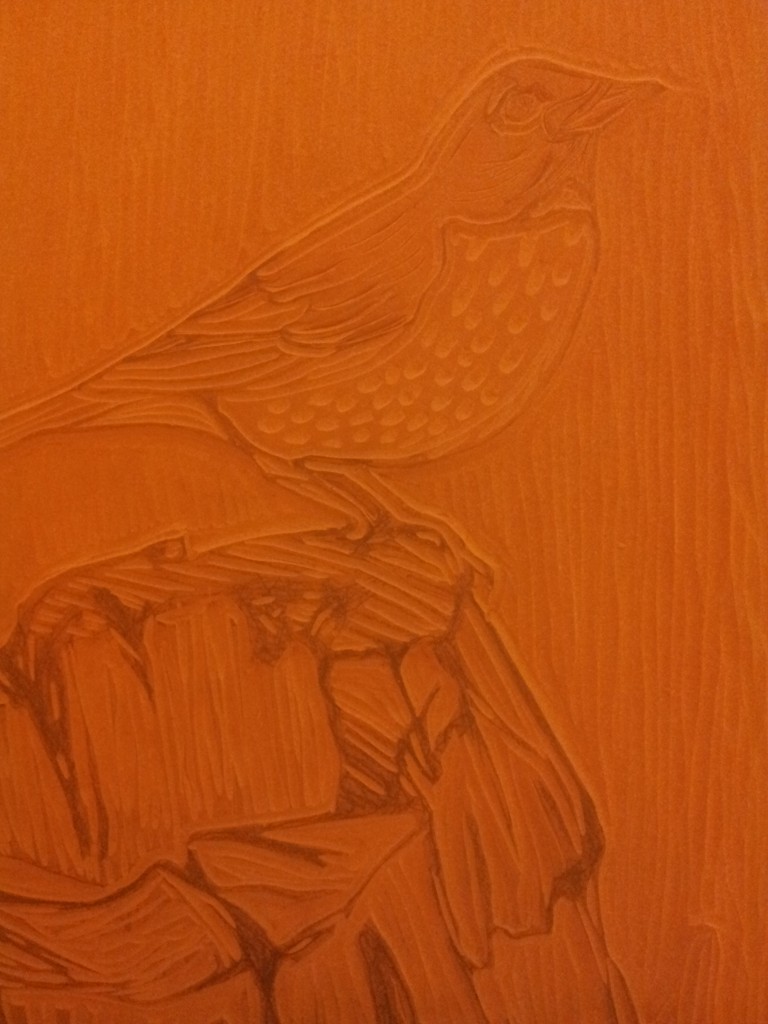 I’m not including the final print in this post, The One that will be entered, because it’s perfect and signed and beautifully framed, and you’ll just have to come to the Art Gala March 29th 6-9pm to bid on it!