Posted at 01:24h in Pregnancy, Sarah by The Redheads 6 Comments
0 Likes

The difference between these two bellies is about ten weeks. And a seasonal wardrobe change. Brr is it chilly these days!

The similarity is gifted clothing (thank you, neighbors!). And bent fingers since my nail biting problem has only gotten worse with every book I’ve read this pregnancy.

Most of my “playing” with the kids involves me in the sitting position. I’ve got SPD. Actually, I haven’t posted much about this pregnancy because…I haven’t had much good to say. Here’s a little rundown, for posterity’s sake.

First trimester: nausea and vomiting like I’ve never experienced. I can talk about it more now…that it’s in the past. This resulted in James cooking breakfast, lunch, and dinner until friends so graciously pitched in to help with meals.

Second trimester: still throwing up. But spending less and less time in the bathroom. Finally had a four-week window where I felt great. Cleaned everything. Cooked all meals. Started baking bread again. Played hard with the kids. Then. I slept on a hotel pullout bed and woke up unable to move. As in, I scootched until I fell out of the bed so that I could try to reset myself. After that I would sneeze or cough, and my hip would pop out of place. I went to MI to help my sister clean out her new house. And left early because I could barely walk. I spent a couple weeks in the chiropractor’s office, in the bathtub, using oils and a maternity belt, bracing myself for any sudden movement, and overall in a great deal of pain. I tried to walk the block to the photo shop and limped all the way home. And James spent those weeks waking up with me in the middle of the night. To help me roll over. I told him the Lord was preparing him to have an infant. I don’t think he bought it, but he never once complained.

Third trimester: we’re just a couple weeks in, and my SPD pain is much more manageable, praise the Lord! Still visiting the chiropractor and eating fewer sugars and gluten items (which are inflammatory foods). Then I contracted bronchitis, which I’m just now recovering from. All I remember of last week is coughing and not breathing. But the baby movement has been unreal! I love these feelings, even the creepy roll-all-around ones. *shiver* Something’s in there!

Amazing. When I read all of that, it’s a little depressing. But the Lord has sustained us up to this point, and we’re confident He’ll do so ’til the end! (We’re also confident that having this baby will be the healthiest thing for my body…and our family, so 11+/- weeks, here we come!)

So back to seated play.

Corban’s super into Legos these days (more about that in his birthday post). And boy has that been FUN! Although somehow in that last pic, I was caught playing without the kids. I swear they were there just the second before…but when a house needs finishing, the mama’s gotta finish it! 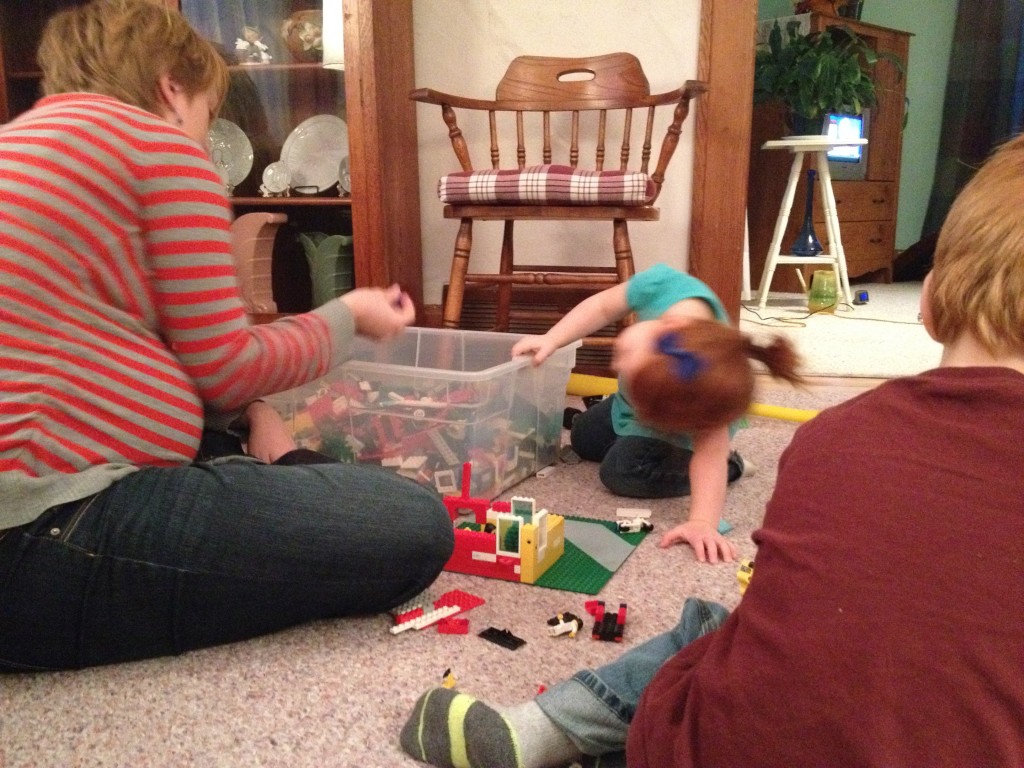 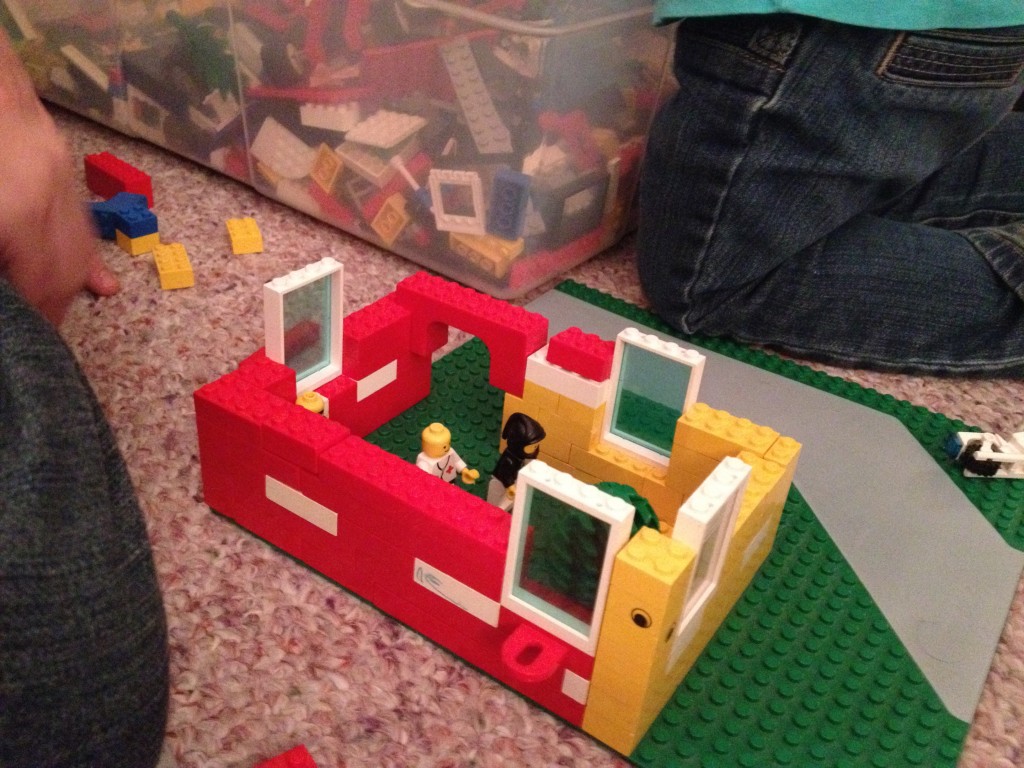 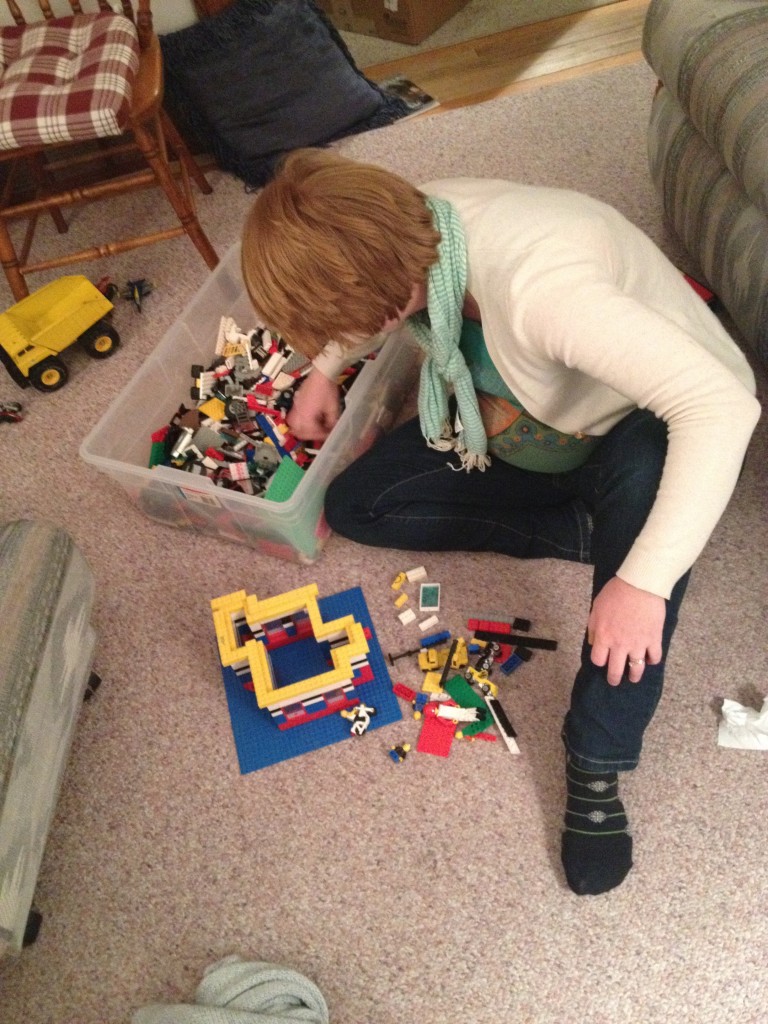