Posted at 11:45h in Family, Pregnancy by The Redheads 0 Comments
0 Likes

When we found out we were expecting, my mind went immediately to how we were going to share the news with our families. Of course, telling them in person is the preferred way, but living long distances from families could force us to wait several months before sharing. And if you know me even one tiny bit, that’s just not happening. But just calling and talking wasn’t satisfying the surprise factor either. So how’d we make it special without being there in person? Here’s how:

Beth from my folks’ church was let in on the secret first, but I think my family could forgive me since she pulled it off so well! She purchased a pink and blue balloon and attached a little poem I sent her. We didn’t have her sign it, because we figured the clue in the poem was signature enough. Then she placed them in my parents’ and sister’s mailboxes at church. My mom actually ignored the balloons; she assumed it was something for/from a graduate but surely not for her! I sat through church with my phone in the car, because I knew they’d call as soon as they saw it and I was *trying* to concentrate on the sermon. But what a fun conversation we had shortly after! 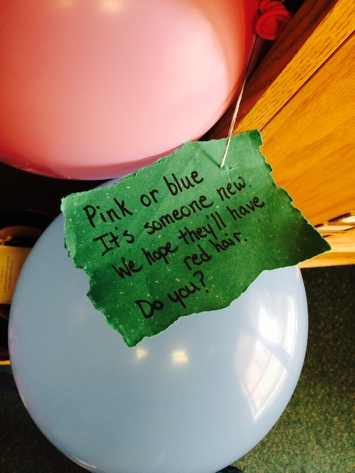 For James’ folks, we went a different route. As the Puzzle Queen herself, we decided to send them a word search puzzle from Corban and Jaeda with words of things they love or that really describe them.  Then starting at the top left going right, all the letters that were not circled spelled the mystery phrase, namely: We’re getting a new sibling! Funny story here, though. So two days after we were certain it had been delivered to their mailbox, we hadn’t received a phone call from them. So we called. They hadn’t checked their P.O. box in several days, but his dad promised they’d check it soon. Two days later, the anticipation was killing us, so at the risk of raising suspicions, we called again. His mom assured us they had received and would do the puzzle the next day. As we were getting ready to say our goodbyes, James started, “Hey, when you finish the puzzle, make sure you…” I thought he was going to say “make sure you call us,” which I thought would sound too suspicious, so I pinched him and he looked at me and stopped talking…and it looked really suspicious. Whoops. What he was planning to say was, “make sure you call Corban and Jaeda; they’d love to hear how you liked their puzzle.” Well, because of my awkward interruption, we hung up…and she completed the puzzle and immediately called us back. And then I breathed a sigh of relief and knew it didn’t have to be a secret anymore.

(Below is not the exact words I used. I didn’t take a a pic of that one but really wanted to remember generally what it looked like:)) 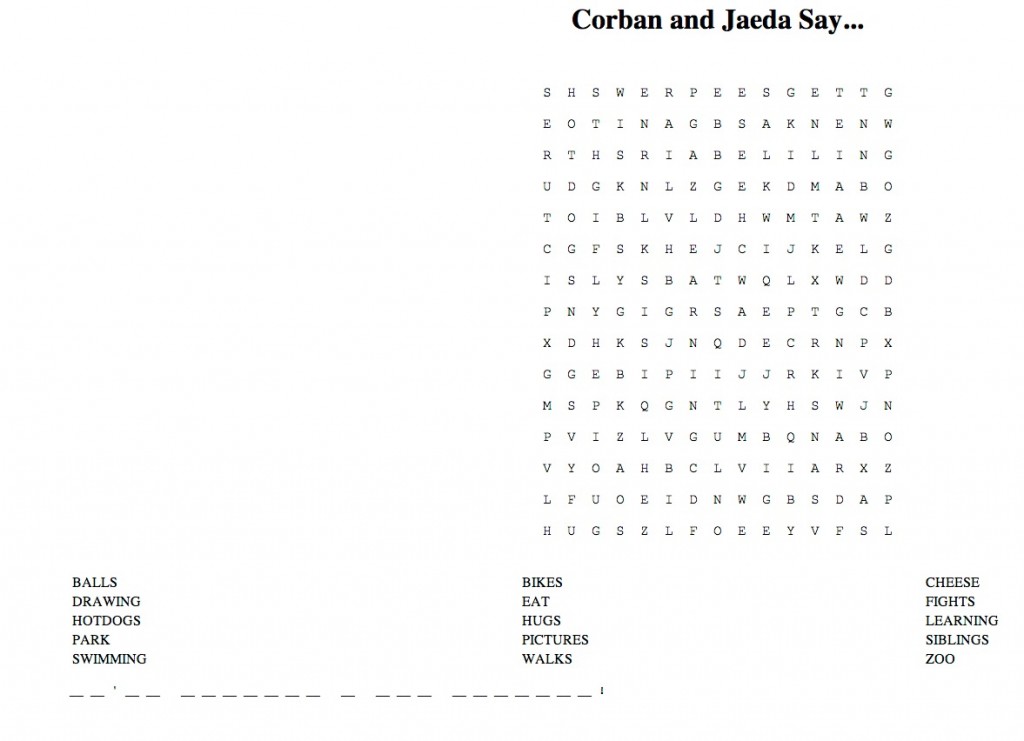 Secrets are fun for a short time (my birthday surprise for James almost killed me with its duration!), but man am I glad this cat’s outta the bag!